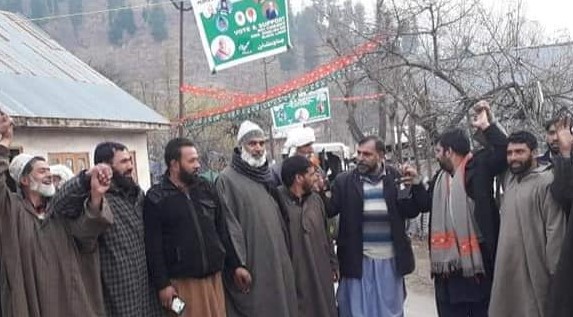 Srinagar, Sep 03: In a big blow to Peoples Democratic Party, its prominent Gujjar leader Choudhary Gulzar Ahmad Khatana has quit the party to throw his weight behind former Chief Minister Ghulam Nabi Azad.
Gulzar, who was one of the influential PDP leaders from south Kashmir, has extended his support to Ghulam Nabi Azad-led camp on Friday in presence of former minister Peerzada Muhammad Sayeed.
“He has joined our camp,”   Peerzada Muhammad Sayeed said.
Gulzar is the son of Nizamuddin Khatana (former MLC) and he himself was vice-chairman of Gujjar Bakerwal advisory during PDP-BJP government with minister of state (MOS) status.  Gulzar’s wife was candidate of PAGD from Larnoo DDC seat.
Gulzar’s exit is a big setback to Peoples Democratic Party as he is considered as  a  serious contender for Kokernag assembly seat after it was reserved for Scheduled Tribes (STs).
“It is a setback to PDP.  Apart from Congress, the PDP is the  major loser in Kashmir by  Azad’s plans to float a new political party,” a political observer said.
According to the observer, Azad-led camp seems to be more focused on south Kashmir in the Valley.
“Most of the politicians from the Valley who have joined Ghulam Nabi Azad are from south Kashmir,” he said.
So far Peerzada Muhammad Sayeed (former minister), Muhammad Amin Bhat( former MLA) and Gulzar Ahmad (Shangus) have extended their support to Azad-led camp from south Kashmir.
With 34 percent ST population , Kokernag seat was reserved for the community by the three-member delimitation commission headed by former Supreme Court judge Justice (retired) Ranjana Desai.kno