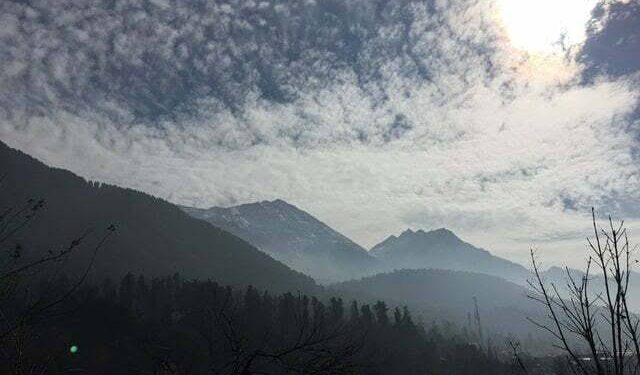 Srinagar, Dec 9: Weatherman on Thursday said that there was no forecast for any “major snowfall” till the start of ‘Chillai-Kalan’— the 40-day harshest winter period which commences on December 21.

“Mainly Dry is expected till December 14. Light to moderate snow/rain in likely at scattered places of J&K on December 15,” an official of the meteorological department said, adding, “There is no forecast for major snowfall till 20th December in both J&K and Ladakh.” He said that there would be warmer days and colder nights in J&K and Ladakh till December 14.

‘Chillai-Kalan’—which commences on December 21 and ends on January 31—is considered the harshest period of the winter when the chances of snowfall are most frequent and maximum. So far this season there have been already at least two spells of considerable snowfall. The cold wave, however, continues even after that in Kashmir with a 20-day-long ‘Chillai-Khurd’ (small cold) and a 10-day-long ‘Chillai-Bachha’ (baby cold).

Meanwhile, the MeT official said that Srinagar, the summer capital of J&K, recorded minimum of minus 2.1°C against previous night’s minus 0.4°C. On December 1 the mercury fell as low as minus 2.5°C in Srinagar which was lowest temperature recorded this season in the city so far.

Qazigund recorded minimum temperature of minus 2.1°C against minus 1.6°C on the previous night in the gateway town of Kashmir, he said.

Pahalgam, the famous resort in south Kashmir, recorded a low of minus 4.9°C against 4.8°C on previous night.

Kokernag, also in south Kashmir, recorded a low of minus 1.5°C against minus 1.4°C on previous night, the official said.

Kupwara town in north Kashmir recorded a low of minus 2.4°C against minus 1.4°C on the previous night, the official said.

Gulmarg witnessed a minimum of minus 5.8°C against minus 6.0°C on the previous night in the world famous skiing resort in north Kashmir’s Baramulla district, the official said.