Will continue to fight for restoring rights of people of J&K: Dr Farooq 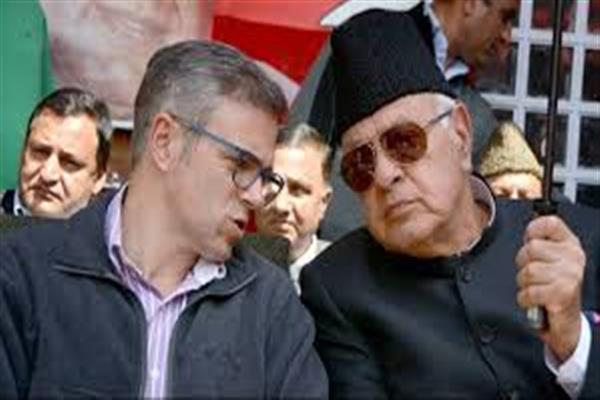 According to a statement the meeting in which wide ranging issues were discussed lasted for eight hours. The party’s Vice President Omar Abdullah also participated in the deliberations.

“We will uphold the interests of the people at all costs in every forum”, Dr Farooq Abdullah said while addressing the National Conference functionaries of the Jammu Province through virtual mode, adding that the political issues post August 5,2019 have been challenged by the party in the apex court of the country.

Dr Abdullah exhorted the cadre to further strengthen its rank and file to meet the challenges faced to Jammu and Kashmir unitedly and by upholding the cherished philosophy of communal and regional amity. He also urged the cadre to reach out to the people in a big way so that all the problems are surmounted with courage and resilience.

Asserting that the National Conference is not against the delimitation process in Jammu and Kashmir, the party President Dr Farooq Abdullah today said the method adopted, however, is not in tandem with the procedure.

The NC President dwelt upon various issues flagged by the party functionaries in detail and shared the concerns over road connectivity especially the smooth functioning of the Mughal Road. He said this link is very vital between the two regions, as the National Highway between Jammu and Srinagar is over-stressed and cannot hold the pressure of such a massive vehicular movement. He said the railway connectivity between Jammu-Poonch and Jammu-Kishtwar is of paramount importance, which has already been taken up by the National Conference in Parliament.

“We will flag this issue with the Prime Minister as well”, Dr Abdullah said, adding that the railway connectivity is the most credible and dependable mode of surface transport, especially in Jammu and Kashmir, which encounters road blockades for the better part of the year due to weather vagaries.

NC President expressed concern over the unfortunate situation unfolded by the pandemic, causing a catastrophe to mankind, and sought active support of the people in making the ongoing vaccination drive a success. This is the only solution to defeating the virus and the party cadre must motivate the people to go for vaccination in a big way.

While expressing concern over the uncertainty looming large in J&K, he urged the cadre to remain steadfast in their resolve to fight for the right cause. This has been proud legacy of the National Conference, he added.

Omar Abdullah stressed the crucial need of further strengthening the party at the grass-roots level by launching a door to door campaign and to prepare the people for meeting the challenges faced in Jammu and Kashmir. He said the mobilization by the cadre during the elections to District Development Councils unfolded the fact that the National Conference is a force to reckon with.

He joined the cadre in paying tribute to colleagues who died due to COVID in the past one year. He expressed concern over tackling the virus while referring to more deaths in the Jammu region, asking where were the BJP leaders, who could not rise to the occasion to seek some respite for the suffering people.

He said the National Conference has, is and will remain in the forefront to seek justice for the people of all the regions and the sub-regions. “Public interest is sacrosanct for us”, he said and urged the cadre to articulate the problems of the people for seeking redressal to these.

Earlier, a two-minute silence was observed in memory of the senior National Conference leaders and all those who fell prey to the pandemic.

Sagar called for expediting the membership drive, hoping that this will gain further momentum with ease in the corona situation.

During the conference, the former ministers, legislators, wings of various provincial wings of the National Conference and district presidents participated in the deliberations.