Rigging of 1987 polls only reason behind present situation in Kashmir: Ram Madhav in Anantnag

Addressing a workers convention in Dak Bungalow, Anantnag, Madhav said, “the 1987 Rajiv-Farooq accord is the reason behind the present deteriorated situation in the valley”.

He added, “rigging of 1987 polls by Dr Farooq Abdullah became the only reason behind what is being witnessed today.” 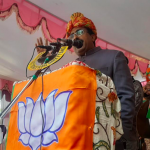 Blaming regional mainstream leadership for creating hurdles in the development of people, he said, “NC & PDP insisted people on boycotting Panchayat & Municipal polls by saying that these polls are a challenge to the identity of J&K.”

Appealing people of South Kashmir to vote in favour of party’s candidate for Anantnag LS constituency Sofi Yousuf he said, “time has come for people of this domain to give chance to developmental politics instead of conflict politics.”