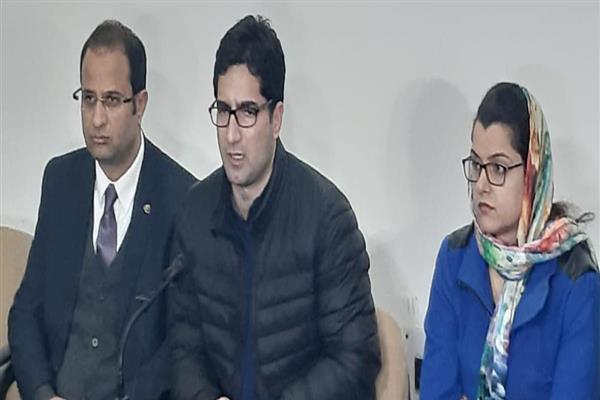 Srinagar: A week after launched ‘Jammu and Kashmir Peoples Movement’, Shah Faesal on Saturday said he won’t contest the upcoming Parliamentary polls and instea.d will focus on Assembly elections.

“People across the state are joining us. We don’t want to participate hurriedly in polls and instead will strengthen our party for assembly polls,” Faesal said.

Lawyer Iqbar Tahir and journalist Chasfeeda Shah on the occasion joined the party.

“Our decision not to contest Lok Sabha polls is a response to those who accused that our party was planted by the Centre for electoral manipulation,” he said.

Asked to which party Jammu and Kashmir Peoples Movement would support in upcoming Lok Sabha polls, he replied, “We will tell you that later to whom our cadre will support. Democracy is important institution and people shall participate in polls. Assembly elections are very critical for our state.”

Condemning the custodial killing of Awantipora youth, Faesal demanded that those responsible for his “killing” shall be arrested. “Judicial enquiry shall also be conducted to unveil the facts,” he said.

He also condemned the killing of 12-year-old boy of Hajin before being held hostage. “Human rights violations have to be stopped,” he said.

He asked the politicians of South Asia to take a cue from New Zealand Prime Minister for safeguarding the rights of minorities in her country. “She has received appreciations from across the world and set up an example,” Faesal said.

He said banning of JKLF would “further shrink” democratic space. “It will not be surprised even if mainstream parties are too banned here. There are people who brought these forces here who wanted to change the secular fabric,” he said.