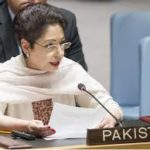 Maleeha Lodhi, Pakistan’s Ambassador to the United Nations while addressing an emergency session of the Organizational of Islamic Countries on Thursday said that the atrocities committed by the Israeli forces are “inhumane”, Express Tribune reported.

“She stated that ‘one member state’ (USA) of the UN security council blocked a Kuwaiti-led UN resolution which was supported by 14 member states, aimed at condemning Israel and its violent military actions in Gaza,’ reports said.

“Pakistan fully supports the People of Palestinians whenever needed,” she said, adding “we strongly criticize the UNSC for keeping silence and not openly condemning Israel for its brutal show of force in Gaza”.

“She further demanded a “fair and transparent” investigation into Israel and its military actions in Gaza must be initiated by the UNSC,” reports said.

The clashes on the Gaza border erupted after the United States moved its embassy from Tel  Aviv to Jerusalem, an act recognising the city as the capital of Israel.

A brutal military crackdown ensued on the Gaza border, leading to the death of 60 Palestinians, while 2700 were injured as a result of the firing and tear gas deployed by the Israeli military.