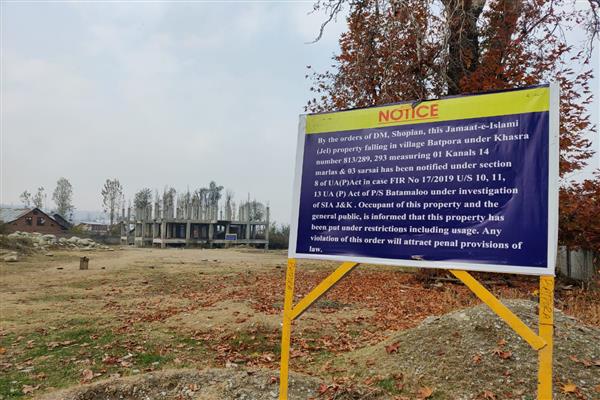 Srinagar, Nov 10: District Magistrate Shopian has ordered ban on entry and usage of at least nine properties including a yet to be functional school building belonging to Jamaat-e-Islami following communication by State Investigation Agency.

The directions have been issued under Section 8 of Unlawful Activities (Prevention) Act, 1967.
The Government of India has already declared the Jamat-e-Islami, Jammu & Kashmir as an “unlawful association”.

“The State Investigation Agency, Kashmir vide communication No. SIA/FIR-17-19/22/7010-14; dated: 05.11.2022 has intimated that during investigation of case FIR No. 17/2019 u/s 10, 11 & 13 UA(P) Act of P/S Batamaloo now being investigated by P/S SIA, nine (09) properties have surfaced that are owned by and under possession of banned association Jamat-e-Islami and are located in the jurisdiction of district Shopian and are to be notified in terms of section 8 UA(P) Act,” DM Shopian Sachin Kumar Vaishya said.

“On perusal of the records and other connected documents, I, District Magistrate Shopian, am satisfied that there is sufficient material to notify (these) properties under the Act”, the notification reads.

By virtue of notification issued by the Central Government coupled with notification issued by the J&K Government and powers vested in him in terms of section 8 of UA(P) Act, the district Magistrate ordered restriction on these nine properties by any person(s), association(s) or legal entity other than investigating officers of SIA for the purpose of investigation and police officers having jurisdiction for the purpose of enforcing the usage related prohibition and restrictions.