Not a big thing. Will vacate government accommodation: Mehbooba Mufti 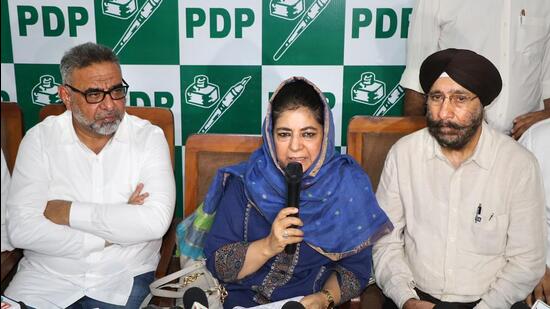 Srinagar, Oct 22: Day after getting the eviction notice, PDP president and former Chief Minister Mehbooba Mufti on Saturday said that she will vacate the government accommodation.

While talking to reporters after holding Fateh prayers at her father’s grave in Bijbehara, Mehbooba said that she is going to vacate the government accommodation as it was not a big thing for her.

The PDP chief alleged that Imran Bashir Ganie, a youth from Shopian was killed in Police custody but there was no discussion on it.

Mehbooba, who headed PDP-BJP coalition government before the saffron party withdrew the support, has been offered alternative accommodation if she “requests” on “security or any other ground”.

The notice sent to Mehbooba on October 15 this year has been issued under sub-section 1 of the section 4 of the Jammu and Kashmir Public Premises (Eviction of Unauthorized Occupant) Act, 1988 read with the Amendment Act 2016, the official sources tsaid

The Guest House was declared “sub-jail” when Mehbooba Mufti was shifted from Transport Yard building here while she remained booked under Public Safety Act (PSA) in the aftermath of the Article 370 revocation.kno