Budgam— Will beg my husband to resign from army; allow him return home: Missing Soldier’s wife appeals all

‘If anybody has abducted him, they should set him free for the sake of his 10-day-old son’ 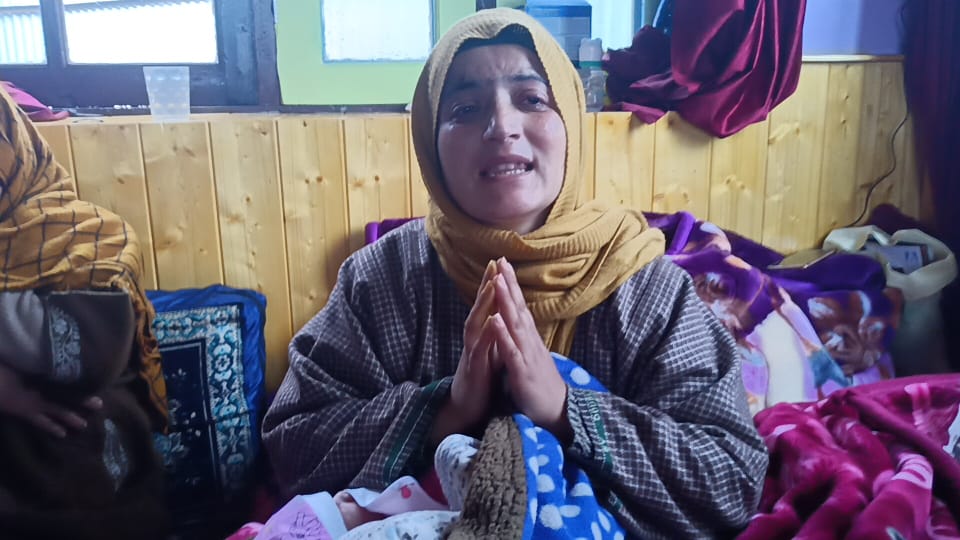 Budgam, Mar 09: The wife of a missing soldier from Khag area of Central Kashmir’s Budgam district Wednesday urged one and all to set her husband free for the sake of her 10-day-old son and elderly parents.

The JAKLI soldier Sameer Ahmed Malla, resident of Khag, Budgam had come to his home on leave. He, according to his family, lost contact with his parents and wife on Monday evening.

Rifat, the wife of Sameer Ahmad Malla , said that they were in Jammu and just returned a few weeks ago.

“I gave birth to my second baby just a week ago. I am already bed-ridden and now news that my husband has gone missing has added to my pain,” she said amid tears. “My first son is crying and asking for his father. He keeps on saying, baba, baba… I have no answers for him.”

Rifat said that if anybody has abducted her husband, they should set him free for the sake of her new born baby and the 3-year-old son.

“I promise, I will beg before my husband and ensure that he quits the army,” she said.

Sameer’s mother Shahmalla said that her son stepped out of his house on Monday afternoon. “When he didn’t return, we called him but his phone was switched off,” she said. “We continue to look at the door with a hope that he may return. We are ready to rectify the mistake made by our son but he should be allowed to come back to his family.”

Sameer’s father, Muhammad Yaqoob said they tried a lot to trace their son but to no avail. “My son was recruited as a driver into J&K’s Territorial Army in 2017,” he said and urged one and all to let his son return home as soon as possible. kno