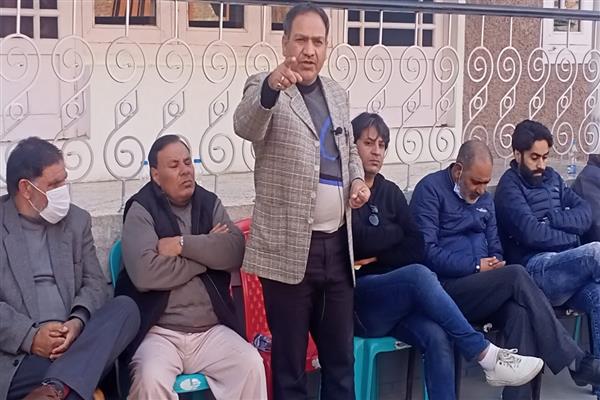 Srinagar February 22: Peoples Democratic Party (PDP) held its first public outreach programme in saidapora Eidgah Srinagar.
The outreach programme was led by PDP District president Srinagar haji Parvez state sectaries Hameed kohseen Gh Mohiduin WACHI and party’s youth state sectarary Arif Laigaroo. Several other leaders participated in programme.
Speaking to the gathering Distric president Srinagar Haji Parvez said that they would fight election with full confidence. He urged the people of EiDGAH Constituency to participate in elections and assured them that fight to bring back Special Status will be fought at all levels.
The state sectarary youth arif Laigaroo condemned the bloodshed and said that dialogue is the only way forward. “ We have been saying dialogue and that is the only way to resolve all issues,” he said adding that intimidation must end and people should be allowed to express their views.
Constituency incharge Eidgah dr ali mohd said that PDP will never betray the people and will represent the aspirations of people. He cautioned the people against the conspiracies which he said are being hatched to divide and rule. “There is strength in unity and those who conspire should be given befitting reply,” he urged the people.
Those who participated in meeting are Abdul qayoom Bhat Bashir beig mohd Sidiq Mir ali mohd baba Abdul Hameed shafi kundangar Asif Wangnoo Fayaz Reshi Umar dar and others.