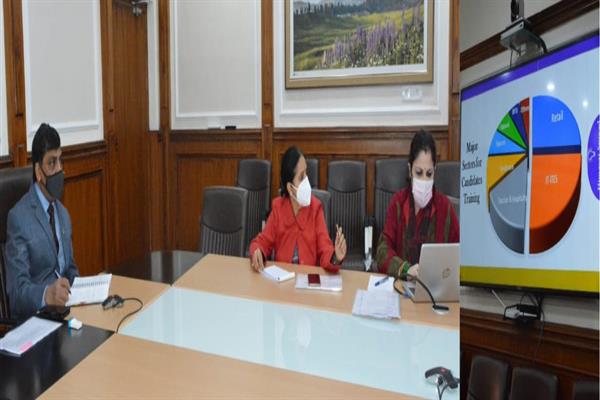 He asked RDD to identify 20 highly educated youth in each Panchayat. Assistance of DDCs and  PRIs may be taken.

He said the trainings and consequent job placement of 60000 youth under HIMAYAT and other self employment initiatives launched by the Government will further the Government’s objective of driving down the unemployment in J&K to below 5 %.

Dr Mehta made this observation while reviewing the HIMAYAT scheme in a meeting attended by Administrative Secretary, RDD and COO, HIMAYAT.

The Chief Secretary said as the Scheme will close on 31st March, 2023, the department should target short term skill based courses spanning 3- 9 months.

She said most of the trainees have received training in sectors/areas like healthcare, IT-TES, retail, telecom, tourism & hospitality etc. while emphasizing that there is also a need to arrange for trainings in domains like carpentry, masonry, plumbing etc in concert with ITIs as there is general shortage of technicians in these trades in the UT.

It was further informed that the plan for training and placing 60000 youth during the next financial year will be finalized in consultation with existing PIAs by end of February 2023.

She said that the department will engage with BRO to ascertain their requirement of skilled, semi skilled work force and based on their requirements, training courses will be got customized/tailor made to train/ equip the youth for jobs in BRO.

The Chief Secretary directed the department to ensure that trainings under HIMAYAT are arranged in sectors like hospitality, industries, housing &urban development, tourism, medical labs, water testing labs in Jal Shakti department etc, as there is going to be increased demand in these sectors due to investment in industries, heightened infrastructure development in these sectors and increased tourist activity in J&K.

While directing the department to ensure that it does not engage such PIAs/TSAs as have failed to file reports with the Government or have not maintained proper accounts or don’t have their own websites and have failed to monitor/conduct regular inspections, the Chief Secretary said only those PIAs which have the required capacity to deliver on mandate and which have neither been blacklisted by GoI nor are involved in any case in ACB should be engaged for training/placement of the identified youth.

Dr Mehta advised the department to put in place a proper institutional mechanism for regular monitoring of the implementation of the HIMAYAT Scheme.