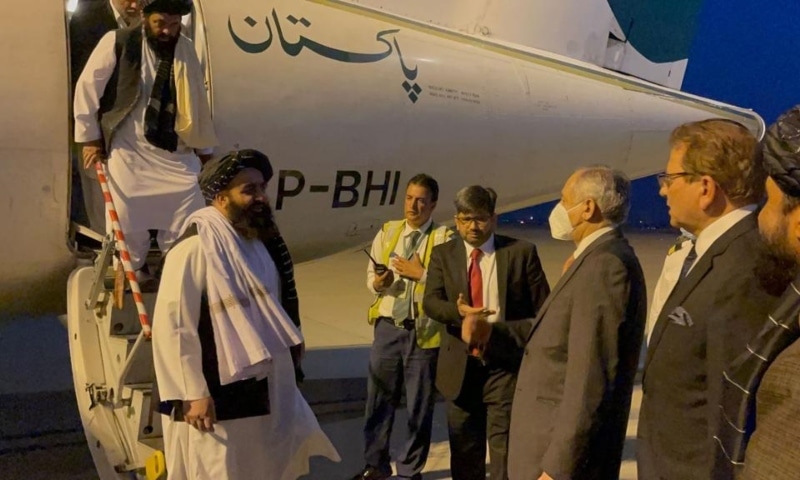 Islamabad: Afghanistan’s acting Foreign Minister Amir Khan Muttaqi arrived in Islamabad on Wednesday evening on a three-day visit to Pakistan for wide-ranging talks on bilateral matters — the first visit to Pakistan by an Afghan minister since the Taliban seized control of Kabul on August 15, Dawn reported.

Muttaqi is leading a 20-member high-level delegation comprising Minister for Finance Hidayatullah Badri, Minister for Industries and Trade Nooruddin Aziz and senior officials from the aviation ministry, according to a list of delegates available with Dawn.com.

The Taliban’s representative at the Afghan embassy in Islamabad, Shakaib Ahmad, was also present on the occasion.

During his visit, the Afghan minister will hold formal talks with Pakistani counterpart Shah Mahmood Qureshi.
Muttaqi will also meet special representatives from China, Russia and the US, who are participating in the Troika Plus meeting scheduled for November 11 (tomorrow).

In a statement on Tuesday, the FO said that Muttaqi’s visit was taking place as a follow-up to Qureshi’s visit to Kabul on Oct 21.

“The exchanges will centre on Pakistan-Afghanistan relations with a particular focus on enhanced trade, facilitation of transit trade, cross-border movement, land and aviation links, people-to-people contacts and regional connectivity,” the FO statement said.

Kabul foreign ministry spokesman Abdul Qahar Balkhi had said that the visiting delegation will discuss bilateral ties between the two countries as well as the economy, transit, refugees and expanding facilities for the movement of people.

Pakistan has not officially recognised the Taliban government, however, Taliban officials have been allowed to take control of the Afghan embassy in Islamabad as well as consulates in Peshawar, Karachi and Quetta. (Dawn)