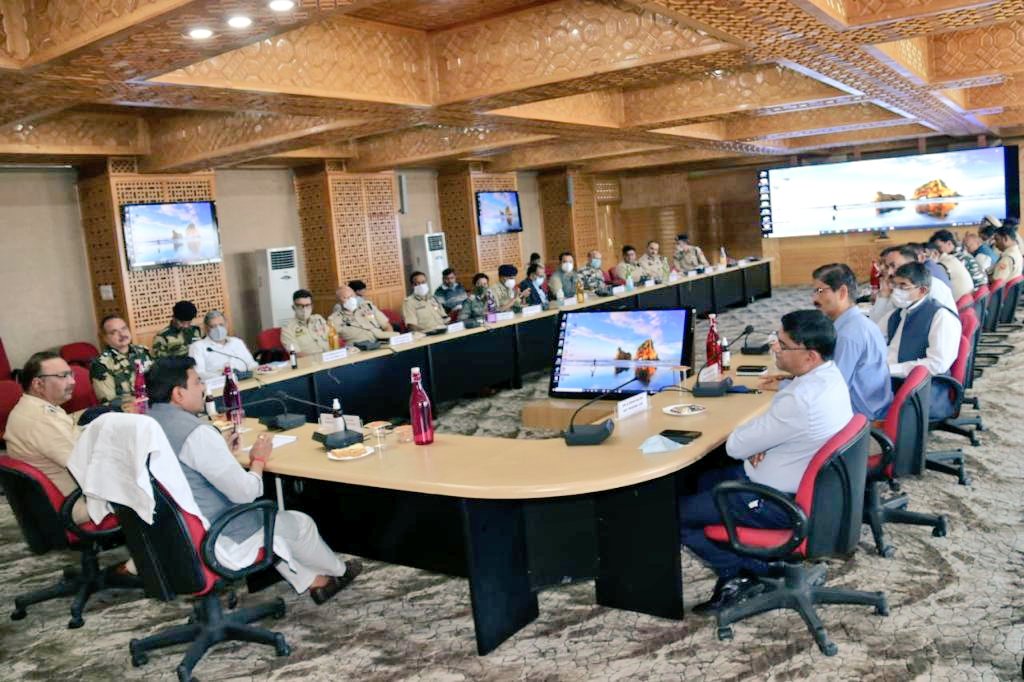 “The MoS, Home affairs while addressing the meeting hailed the joint efforts and resolve of J&K Police and other security forces for peace and stability in Jammu and Kashmir.”

He said that synergy between different forces has provided peaceful atmosphere for overall development and asked the officers to continue the hardwork with more dedication to ensure long lasting peace, the statement reads. “He also appreciated the forces for dealing with different situations effectively without collateral damages”.

The minister said that he had a public interaction in Shopian district and observed that good understanding and response to the expectations of the people have resulted in people showing increased confidence in Police and other civil administration, the statement reads.

“The MoS Home said that he could feel the big overall improvement in the security situation as he openly met large number of people in Shopian in the way as if he would be meeting people in his own constituency” the statement said, adding, “ He said that he could feel a change in the thinking of people post abrogation of Article 370 as they want development in different sectors including infrastructure, education, employment and health.”

The confidence of people in Police, CAPF and administration has increased and there is positivity in the environment, the minister added as per the statement. He wished Police and CAPFs success for the peace mission in Jammu and Kashmir.

Earlier in his introductory briefing the DGP J&K gave a brief presentation regarding different phases of the situation in the last seven decades.

The DGP said that great coordination and understanding between J&K police and other security forces has resulted in “drastic improvement” in the security situation and law & order in Jammu and Kashmir. He informed that the graph of active militants and recruitment of local youth in militant groups in J&K is constantly coming down. He said that the law and order situation over the past four years in Jammu and Kashmir has witnessed complete transformation and law & order incidents have come down drastically.

The DGP highlighted the role of the Police, and security forces in neutralizing the militants in J&K and also action against the OGWs, the statement said. “He apprised the minister with regard to the joint and coordinated measures taken to check infiltration and to fight the anti peace elements through border grid, highway grid and counter insurgency grid.”

The DGP also highlighted the efforts of police, administration and security forces in engaging the youth in positive activities and channelizing their energy towards positive direction by organizing a wide range of sports activities and youth engagement programmes across J&K, the statement said. “He said that J&K Police are organizing police community partnerships meetings at a wider scale to strengthen the police public relations.”

The senior officers of different organizations and wings of J&K Police briefed the minister and some of them put forth certain requirements of housing and logistics.

Earlier, the minister was received by Director General of Police, Dilbag Singh and other senior officers and was presented ceremonial guard of honour on his arrival to Police Headquarters.