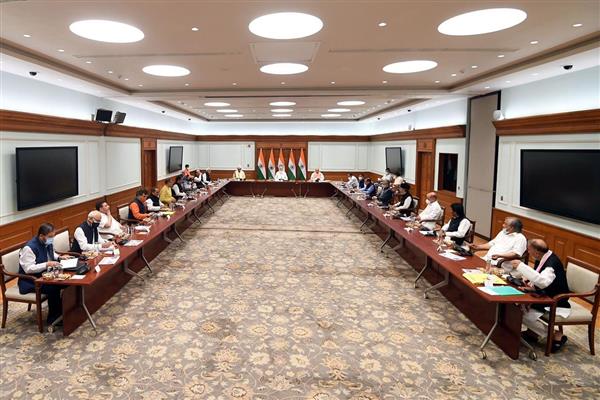 Kargil, Jun 26: Barely three days after the leaders of different political parties of J&K held talks with the Prime Minister of India, the leadership of the Kargil Democratic Alliance (KDA)  has received an invitation from the Ministry of Home Affairs (MHA) to hold talks with Minister of State (MOS) home GK Reddy on 01 July next month in New Delhi.

The MHA In January in the ensuing year announced the formation of a committee headed by MoS Home GK Reddy to hold deliberations with the leaders based in the twin districts of Ladakh about the demands and possibilities of UT’s inclusion into the 6th schedule.

A year after the central government revoked Article 370 and 35A, two groups of seniors leaders from Leh and Kargil districts in Ladakh named Apex Body and KDA were formed with separate agendas.

The Apex Body in Leh took a u-turn a few days back from demanding the 6th schedule to a UT with legislature while the KDA since the formation demanded the pre-August 05, 2019 status and a full-fledged state for Ladakh.

Sources said the members of KDA has received an invitation from the MHA for July 1 to hold talks with the committee chairman MoS Home GK Reddy related to the demands raised by them in New Delhi.

Former minister and the Co-Chairman of KDA Qamar Ali Akhoon while confirming the invitation from the central government said that they have received an invitation from the MHA and have been invited for talks with the MoS Home GK Reddy on July 1 in New Delhi.

“Our stand is very clear and we continue to seek the same which is the restoration of pre-August 05, 2019 status and a full-fledged state with the legislature,” Akhoon said.

Akhoon said that their stand will not change no matter the circumstances, since KDA is also a part of the case filed before the Supreme Court of India demanding the restoration of Article 370 and 35A (Pre-August 05, 2019 status).

“Our members heading to New Delhi will include social, political, student, youth, religious and other leaders associated with KDA,” he said.

He informed that the meeting is aimed to hold deliberations related to the situation in the region post-August 05, 2019.

Chief Executive Councillor (CEC) Kargil Feroz Ahmad Khan who is also part of the visiting team said that the demand of KDA is very clear.

“We demand the restoration of Article 370 and 35A and now when the matter is sub-justice the central government if sincere must give a full-fledged state to Ladakh,” he said.

Khan said that Apex Body has changed its stance from demanding the 6th schedule to a UT with Legislature but in Union Territory status the legislature has no power. “The demand of KDA is clear and we demand a full-fledged state for Ladakh”, he said.

A senior member of the KDA while requesting not to be named said that the Apex Body took a U-turn recently on the demand for the 6th schedule for the region. “It seems they have realized that the 6th schedule has no executive, judicial, and political powers with them in the government elected by the people,” he said.

Asghar Ali Karbalai, the Co-chairman of KDA while echoing similar concerns said that a total of 11 member team including the two co-chairperson, CEC Kargil and other members associated with them will hold talks with the MoS Home on July 1 right at 11 am in New Delhi.

“Our demand is the restoration of Article 370 and 35A and a separate statehood for Ladakh,” he said. kno