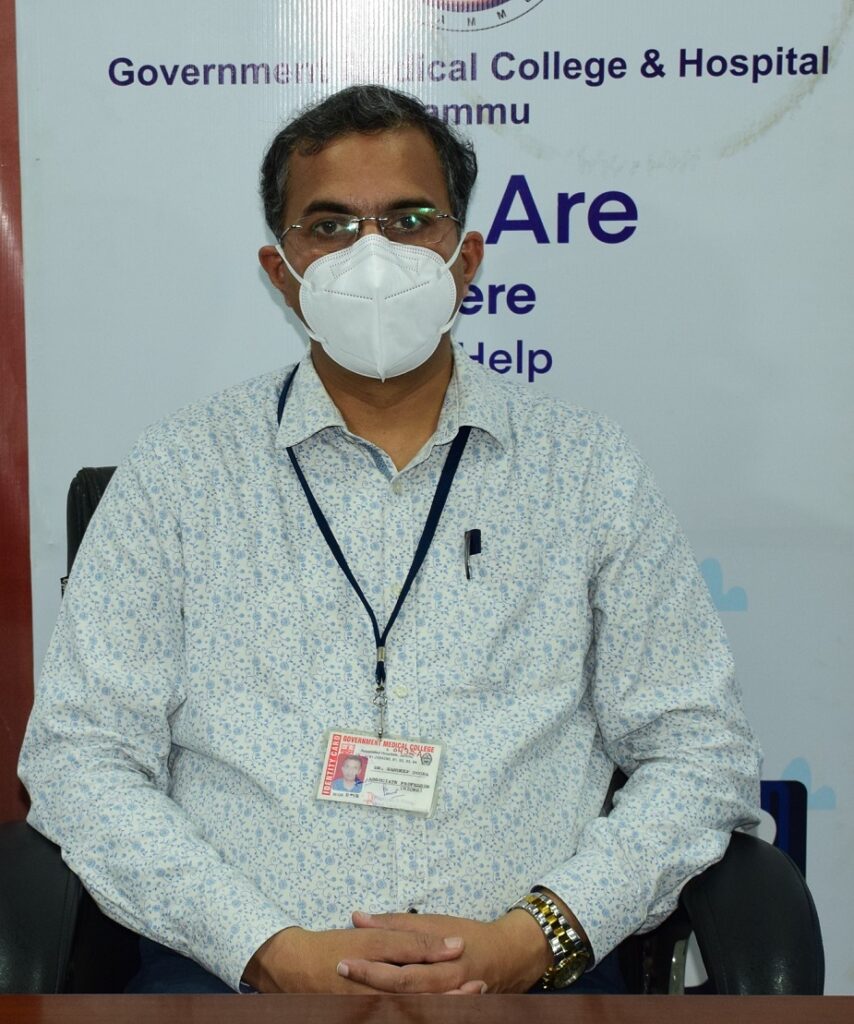 JAMMU, MAY 14: ‘The Covid virus variant from the second wave is more transmissive and more fatal than the previous one. If we do not stop its chain of transmission, nothing can stop the virus from mutating further and producing deadlier variants’. The warning comes from Consultant Microbiology, Government Medical College Jammu, Dr Sandeep Dogra, who says that the variant is more virulent and more fatal.

Dr Sandeep said that while the first wave mostly affected the middle aged, the old and the sick, the second wave is targeting to all age groups and is more transmissive on the whole. He says that the second wave has reached far into the rural areas of the country unlike the first one.

‘Our lax covid appropriate behavior is responsible for the second wave. We have to make sure that the same mistakes are not repeated. The virus is fast mutating. Just like us humans the virus is also fighting for its survival. This is a war which we have to win at all costs!’, he continued.

Reassuring, Dr Sandeep said,”The mantra to stay safe from the second wave of Covid-19 is to double the precautions; wear two masks instead of one and keep distance of du gaz, instead of one at public places’. He urged the public to avoid participation in and organising ‘super spreader events’ like functions, parties and religious events.

Highlighting its significance, Dr Sandeep said that the vaccine is the most important tool to break the chain of transmission of the virus. He appreciated enthusiasm shown by the people of 18-45 year age for taking vaccine. He also urged those older than 45 years, especially the ones with comorbidities to get vaccinated. Pregnant and lactating women are not to be vaccinated, he added.

Dr Dogra differentiated between the Rapid Antigen Test (RAT) and RT-PCR and said that as soon as positive report is obtained from the RAT, the infected person should immediately isolate himself. “There is no need to go for further RT-PCR test”, he said. “On the contrary”, he added, “If negative results are obtained from RAT despite having Covid symptoms, one should get an RT-PCR test done’.

“If you test positive, there is no need to panic. According to observations made over the last year, it could be concluded that 80-85 percent of Covid patients fall under mild category. Such patients either show no symptoms or very few symptoms. They recover easily and require only isolation in a well ventilated space, and regular self monitoring.’

Explaining the process of self monitoring, Dr Sandeep said that it involves routine checkup of body temperature and oxygen saturation levels. Self monitoring, he warns, should not involve self medication. He said that medication should only be taken after consultation, telephonic or otherwise, with a doctor. He informed that telemedicine services have also been launched by the government and should be used.

He concluded by saying that the public needs to religiously follow Covid appropriate behavior and get vaccinated to ensure that the third wave doesn’t ensue.