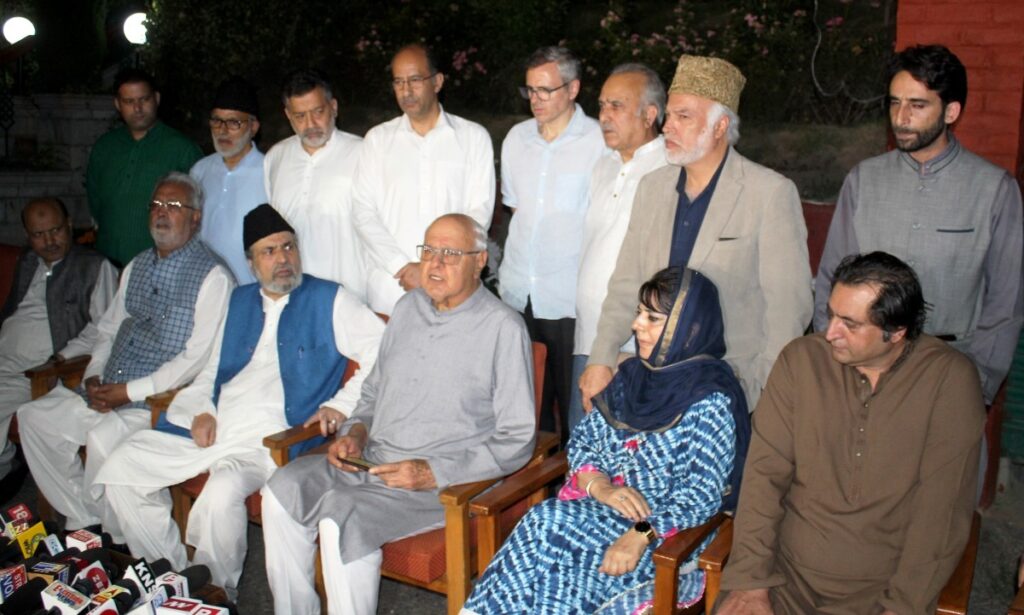 Srinagar, Oct 14: In a significant political development, National Conference president and three-time Chief Minister Dr Farooq Abdullah will convene a meeting of signatories of Gupkar declaration on Thursday afternoon at his residence.

Talking to media persons after meeting Mehbooba Mufti, who was released last evening, at her Gupkar residence here, National Conference vice-president Omar Abdullah said that she has accepted invitation for attending the meeting of signatories of Gupkar Declaration tomorrow.

“She has kindly accepted Farooq sahib’s invitation to join a meeting of the Gupkar Declaration signatories tomorrow afternoon, “Omar said.

The meeting is being held two days after PDP president Mehbooba Mufti was released from 14 months detention- six months under the Criminal Procedure Code and eight months under the Public Safety Act. Hours before abrogation of the Article 370, the Central government detained all top mainstream including Farooq Abdullah, Omar Abdullah, Mehbooba Mufti, Sajad Gani Lone. They were kept in detention for period ranging between seven months to 14 months.

The signatories of the resolution met on August 22 this year and vowed fight for restoration of the special status of Jammu and Kashmir as it existed pre-August 5, 2019, saying the measures taken were “spitefully shortsighted” and “grossly unconstitutional”.

The parties reiterated that they are bound, wholly, by the contents of the ‘Gupkar Declaration’.

The further said that the “unfortunate events” of August 5 last year have unrecognizably changed the relationship between J-K and New Delhi.

“The series of measures undertaken on August 5, 2019 were grossly unconstitutional and in reality measures of disempowerment and a challenge to the basic identity of the people of J-K. The measures attempt to redefine who we are. These changes were accompanied by repressive measures meant to silence people and coerce them into submission, and continue unabated,” the resolution read.