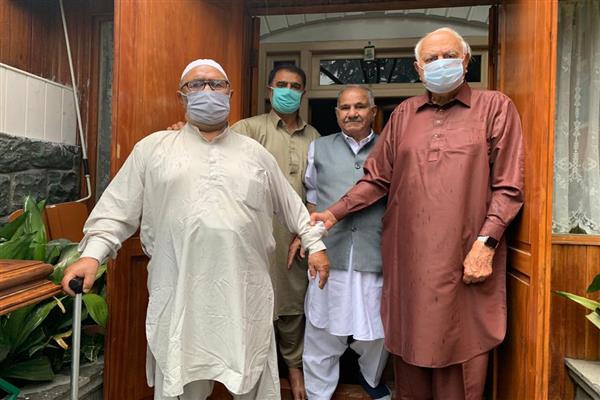 The CPI delegation led by Abdur Rehman Tukroo expressed complete unison with the party president in his efforts towards the restoration of what was snatched from the people of J&K on August 5th last year.

The visiting delegation discussed various facets of unprecedented developments that took place last year and its far-reaching repercussions on the people of Jammu and Kashmir.

The visiting delegation rejected the status quo on the issue and appreciated the party president’s call for forging unity to work towards the reversal of measures undertaken last year on august the 5thby GOI.

The General Secretary of the CPI Mr. D Raja has also expressed his unequivocal support for the objectives of the Gupkar declaration which endeavors to strive peacefully for the restoration of rights of the people that were stripped on 5th of August.

“These are testing times for us. It is elevating to see CPI support the Gupkar Declaration. I appreciate the CPI leadership for lending support to a common cause and for raising the concerns of the people of J&K at various forums nationally in an unadulterated manner,” he said.