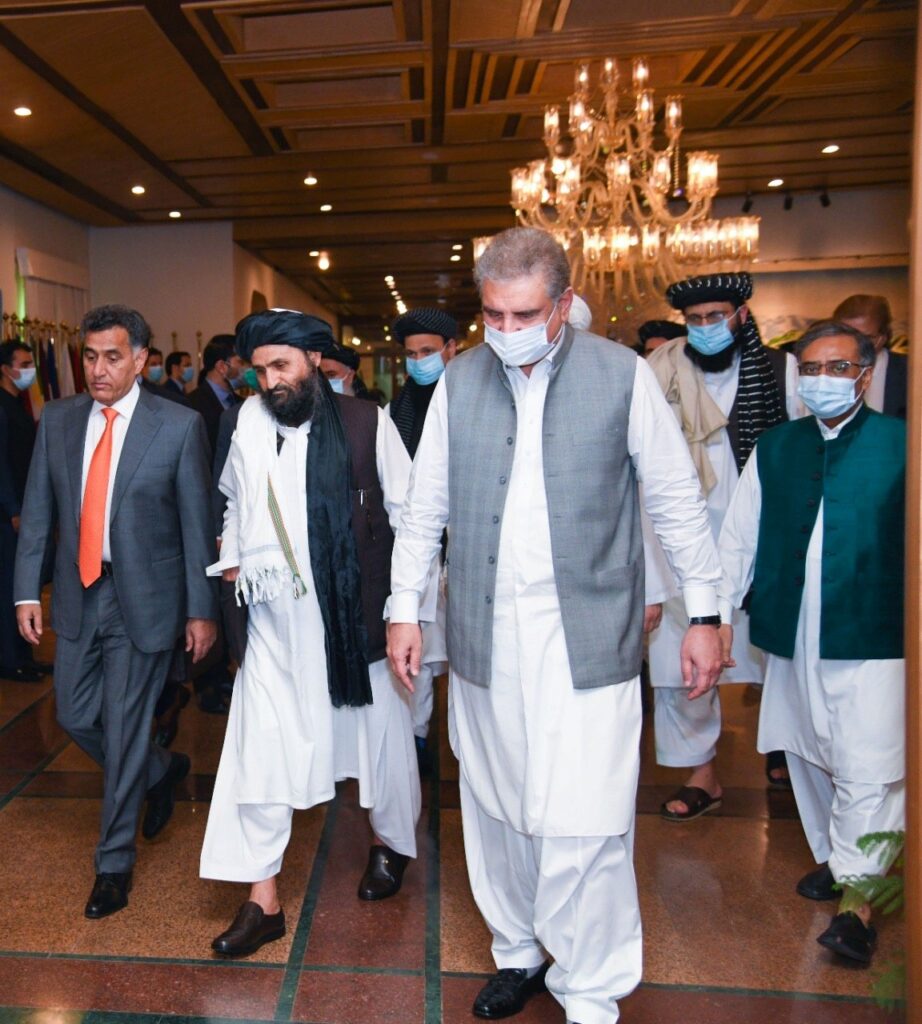 “After listening to Taliban delegation, I’m optimistic of progress in the near future despite problems and the presence of spoilers. Hopefully a way out would be found,” Mr Qureshi said while talking to journalists after meeting an Afghan Taliban delegation led by Mullah Abdul Ghani Baradar, the director of Taliban’s Doha-based political office, at the Foreign Office.

This is the Taliban’s second visit to Islamabad. A delegation led by Mullah Baradar had visited Pakistan in October last year.

The talks at the Foreign Office were largely focused on recent developments in the Afghan peace process and convening of intra-Afghan talks. Other issues related to Afghan refugees were also discussed during the meeting.

The delay in the release of the remaining 320 Taliban prisoners by the Afghan government is holding back the start of the crucial intra-Afghan dialogue. Kabul was to release 5,000 Taliban fighters in exchange for its 1,000 security personnel held by the insurgents under an agreement signed between the United States and Taliban in February. It is, however, dragging its feet on the release of the remaining 320 prisoners despite an approval by the Loya Jirga and a subsequent presidential decree ordering their liberation. Kabul has been making different excuses for not setting them free.

The FO in a statement said Foreign Minister Qureshi had stressed the need for implementing the US-Taliban agreement in entirety for paving the way for intra-Afghan talks. He was apparently referring to Kabul not fulfilling its part of the deal.

The Taliban delegation shared their view with the foreign minister on the latest developments in the implementation of the agreement reached between the Taliban and the US and the impediments to the start of the intra-Afghan dialogue.

“The Taliban look ready and agreeable to moving in the direction of a settlement of the outstanding issues through dialogue,” Mr Qureshi told journalists.

He did not explain the basis of his optimism.

Violence in Afghanistan has continued. Dozens were killed and injured in a vehicle-borne suicide attack at a military base in Balkh province on Tuesday. The attack was claimed by Taliban insurgents. Earlier on Sunday, there was another attack by Taliban in Deh Yak district of Ghazni province in which several security personnel were killed.

The foreign minister noted: “It has been Pakistan’s position that a lasting and permanent solution to the Afghan problem is possible only through an Afghan-led dialogue. Pakistan’s sincere efforts contributed to the signing of the agreement between Taliban and the US in Doha on Feb 29.”

During the meeting, Mr Qureshi urged the Taliban to take full advantage of the rare opportunity provided by the agreement with the US for peace in Afghanistan. He said Pakistan wished early holding of intra-Afghan talks to ensure peace and stability in the region.

Pakistan, he said, would continue its conciliatory efforts to ensure lasting peace and stability in the region, including the Afghan peace process.

The foreign minister also warned the Taliban delegation of the potential dangers of sabotage of the Afghan peace process by the “spoilers”.

According to foreign news agency AP, Pakistan has recently issued sweeping financial sanctions against the Afghan Taliban, just as the militant group is in the midst of a US-led peace process in the warn-torn country. The timing of the decision to issue the sanctions could be seen as a move to pressure the Taliban into a quick start to intra-Afghan negotiations.

Taliban’s political spokesman Suhail Shaheen had said on Saturday that the financial sanctions had been in place for some time. But he said any tightening of a ban on travel could hurt peace negotiations.

“There is a need for a relaxation of such curbs and embargoes because we are entering into another phase of [finding a] peaceful solution of the Afghan issue,” Shaheen had said in an interview.

(The story was published in Dawn newspaper)