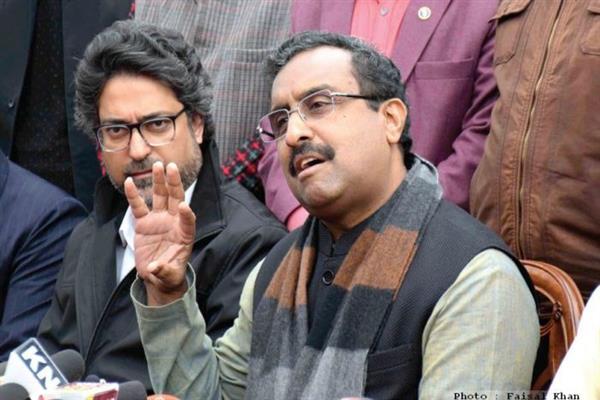 Srinagar: To woo more people towards it in Kashmir, the Bhartiya Janta Party (BJP) has decided to go for a major public contact program ahead of the Assembly polls with party’s national General Secretary Ram Madhav scheduled to visit the Valley next week.

Sources in BJP  said that Madhav’s visit assumes significance given the fact that party at present is busy in wooing people through its ongoing membership drive across the State with an eye to bring all the 17 lakh voters who voted in its favour in the recently concluded Lok Sabha polls, into the party fold as basic members.

“Ram Madhavji is arriving next week to take stock of the party’s functioning across Kashmir and to meet party leaders from Kashmir to raise their morale. He will also review the party’s ongoing membership drive and get feed from district and constituency presidents involved in the drive,” said a senior party functionary.

He claimed that since July 7, the BJP has managed to bring at least 1, 00,000 new members into the party fold as new members in Kashmir only while as in Jammu region, membership has crossed three lakh mark and is set to break record in the coming days.

In Kashmir, majority of party leaders are focusing on strengthening the party base in a bid to win at least five seats from the region in the upcoming Assembly polls.

“Omar is afraid of BJP as he has already accepted defeat by saying that if people won’t vote, BJP will come to power. He finally is speaking the truth that BJP is coming to power. We will win elections with majority and chief minister will be from our party,” he said.

Raina said that the additional deployment of forces was being made for polls and there was no link with revocation of Article 35A.

Asked about attacks on minority community members, he said, there was nothing like that as people of all walks of life and every section were living across the country in a peaceful manner.  (KNS)