By joining hands with BJP, Mufti had captured ‘ghost in bottle’: Mehbooba 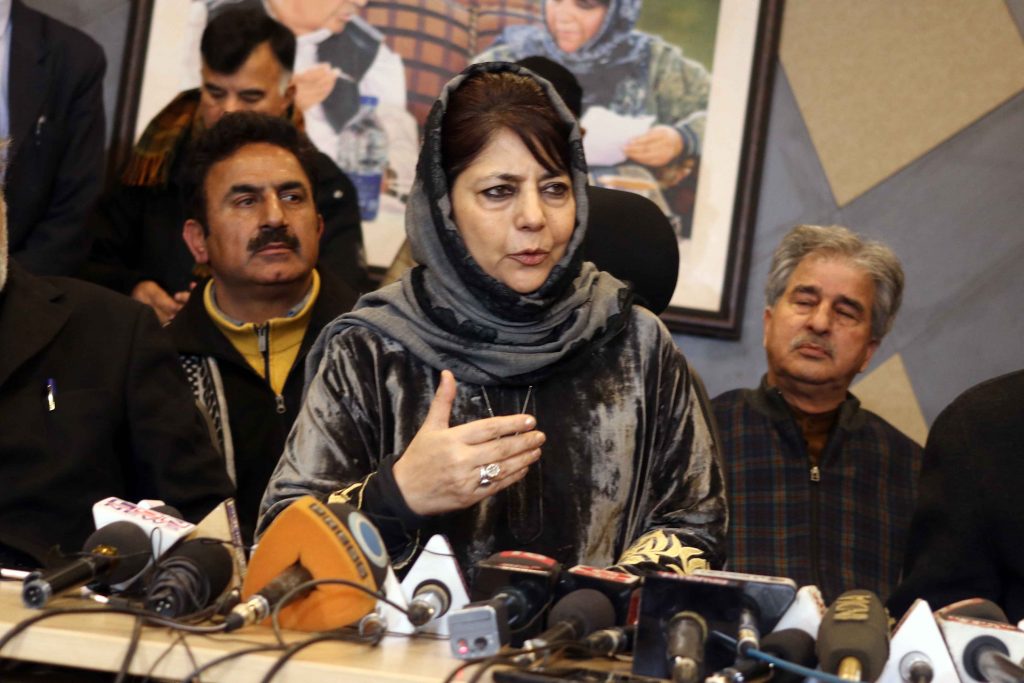 She said that given the mandate, BJP lost a “golden opportunity” to resolve the Kashmir issue and to stop the blood in the Valley.

“Mufti Sahib time and again said that Modi has a two-fold mandate. He is a Prime Minister of BJP. He is backed by RSS and Bajrang Dal and other Hindu parties,” she said, adding, “Mufti sahib had given a golden opportunity to him to resolve Kashmir by joining hands with (Prime Minister) Modi.”

She said Mufti tried to cure “disease of youth carrying stones in hands, wielding gun and struggling with unemployment.”

Mehbooba said that Mufti Sayeed had asked people to give him 40 seats but the fractured mandate which saw BJP winning 25 seats meant that “PDP had no option but to drink a cup of poison by joining hands” with the saffron party.

“By joining hands with BJP, Mufti Sahib captured the ghost in bottle. The ghost who talks about abrogation of Article 370, 35A today and the ghost who has closed the national highway for two days a week. The ghost who through NIA is not sparing leaders like Mirwaiz Umar Farooq and taking others to Tihar jail,” said Mehbooba while addressing a poll rally in Dak Bangalow Anantnag.

She said that Mufti had joined hands with BJP on pre-conditions of having a dialogue with Pakistan and Hurriyat Conference and not touching Article 370. She according to GNS said that BJP also agreed to withdraw AFPSA and return power projects.

Mehbooba said that India leaders are trying to end the Muslim majority status of Kashmir and by threatening to abrogate Article 370 and 35A, they keeping on “pestering” the people of the state.

“They cannot repealing the Article 370 or Article 35A and if they do so, the relation between India and Kashmir will end,” she said, adding, “There would be such a blaze from Kashmir that will destroy along with entire South Asia.”

By stating that chances of dialogue between New Delhi and Islamabad are more with BJP winning the elections, she said that Imran Khan, the Prime Minister of Pakistan, has said what her father asserted much earlier.

“Why are you feeling embarrassed? Raise your heads and tell the people what Prime Minister of Pakistan is saying today has been said much before by Mufti Sayeed,” she asked party activists said and urged people to vote for her.  “Previously I won by 50 to 60 thousands votes, today I shall win by one lakh votes.”