Loot of public property: How BDO Kanipora took department’s LCD TV to his home for personal use?

By Press Correspondent on August 1, 2018 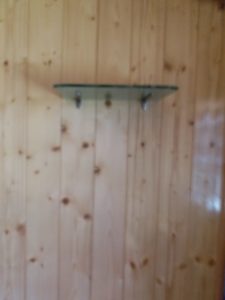 Telling the tale of loot of public property: An empty shelf where the LCD TV was kept in BDO office Kanipora

Srinagar: Two years ago, the Block Development Office (BDO), Kanipora, located on the outskirts of Srinagar was given new make-over.

The office walls were wood paneled, floors were furnished, and the BDO office acquired a new flashy 24 inch LCD TV.

The BDO office constructed a glass shelf for the LCD TV. If there would be a nail-biting matches between the cricketing giants or an important government decisions pertaining to the departmental affairs, the BDO- head of the office- would remain abreast with the latest happenings.

However, the LCD TV suddenly went missing from the office after the new BDO, Aijaz Ahmad, took over the reigns more than a year ago.

“The first thing he did after taking the charge was that he removed the LCD TV from his office,” an official working in the BDO office Kanipora said.

“Then he transported the TV to his home as it was his personal property. Now he is enjoying watching news and cricket matches on the LCD purhased from the public exchequer”.

After the LCD was stealthily removed, the officials in the department said that it sent shock waves across the department as to how the senior officer of the rank of BDO will steal the department’s LCD in a broad day light.

“Since the BDO Aijaz is head of the office, nobody mustered courage to talk about the sudden disappearence of LCD from the office”.

Now the TV shelf in the office is empty to tells a tale of wide-spread corruption and loot of the public property by the very officers who run it.

While investigating further about the missing LCD TV, The Kashmir Press contacted the former BDO Kanipora, Zubair Ahmad Bhat, who confirmed that the BDO office Kanipora was given a new makeover during his tenure.

“We renovated the office. Apart from wooden paneling the walls of the office, new flooring, we also brought new LCD TV,” Bhat said.

“It was all done to give office a good look and provide employees a comfortable surroundings so that they can contribute constructively towards the department”.

The official said he brought the Samsung LCD TV worth 28000 rupees and then put it in the BDO office.

“It just disappeared one day after Aijaz came,” official said.

The Kashmir Press contacted BDO Kanipora Aijaz Ahmad several times, but he refused to take the call or present his version of the story.