'Approves work on ring road, AIIMS and other developmental projects' 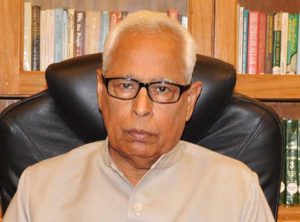 The meeting was attended by advisers to the governor which include B B Vyas and Vijay Kumar besides Chief Secretary, B V R Subrahmanyam was also in attendance.

The SAC deliberated upon the various proposals submitted by Administrative departments for its consideration and approval which are as under;

In a significant decision meant to benefit the youth in particular residing near the International Border/LoC, the SAC accorded sanction to the raising of 02 Border Battalions one each for Jammu and Kashmir regions, along-with the creation of 2014 posts of various ranks. The 1402 posts of Constables available in these two Border Battalions would be filled from amongst the youth residing within 0-10 KM from IB/LoC. The remaining 600 posts will be filled by recruitment from across the State.

The decision of establishment of two Border Police Battalions will positively impact upon the lives of thousands of youth residing in border areas of the State. The residents of border areas have been highlighting the issue of their under-representation in the State Police Force and have persistently demanded raising of adequate number of Border Police Battalions, with a provision of exclusive recruitment for the border residents.

The SAC further directed the Home Department to complete the recruitment to these Border Battalions through a transparent recruitment process within the next six months and the status be placed before the SAC then. Funds to the tune of Rs 162 Crore, shall be made available for creating the requisite infrastructure for these Battalions and another Rs 36 Crore shall be required annually for meeting the recurring expenses towards salary etc.

The SAC took note of the status of the construction of 12165 Individual and 1347 Community Bunkers along the IB/LoC being constructed at an estimated cost of Rs 415 Crore.

The SAC further directed the Home Department to take appropriate measures to ensure that Community Type Bunkers, upon completion, are handed over to the District Administration concerned for optimum utilization and adequate maintenance.

The Union Ministry of Home Affairs (MHA) has accorded sanction to the construction of 1431 Community Type Bunkers and 13,029 Individual Type Bunkers for safety and security of the residents in five border Districts of Jammu division viz Jammu, Samba, Kathua, Rajouri and Poonch.

A Divisional Level Committee has been constituted to supervise and review the progress of construction and also furnish physical and financial progress reports on monthly basis.

Creation of 32 additional posts for Health Institutions
The SAC accorded sanction to the creation of 32 additional posts of various categories for the recently upgraded three health institutions including 16 posts for Sub District Hospital (SDH) at Hazratbal in Srinagar, 8 posts each for Primary Health Centre (PHC) at Domana in Jammu and PHC at Devar in Kupwara. The availability of additional manpower will further improve the patient care in these health institutions.

Use of Forest Land for developmental purposes
The SAC gave major impetus to developmental activities in the State by providing forest clearance to various developmental projects in the road, railways, transmission, health, drinking water and other sectors involving 153.18

Ha of forest land spread across the State. The proposals were recommended by the Forest Advisory Committee (FAC), headed by the Chief Secretary in its 105th, 107th and 108th FAC meetings.

Among other projects, the SAC accorded approval to the prestigious project of AIIMS at Vijaypur, Ring Road Srinagar, 14 projects of PMGSY, 02 projects pertaining to GREF and the Army. Another project which was cleared was regarding the laying of 132 KV transmission line from Grid Station Katra to Gran (Reasi) for Konkan Railways.

The FAC in its 105th meeting had approved diversion of forest land for development works viz Road from Pathwar to Thathi (Jammu), Road from Chalog to Dhaman (Basholi), Road from Purana Tulail to Dangithal and from LO – 26 to Safaid Aab (Bandipore), Road from Dhaino to Papriya (Batote), Road from Malla to Jogwan (Jammu), Ring Road Srinagar City and Tunnel T-6 to T-12 on Katra Dharma Section (Mahore) etc.

The FAC in its 107th meeting had approved diversion of forest land for development works viz construction of road from Juthal to Manoh (Jammu), road from Mankal to Mudva (Langate) and for the purpose of laying of 132 KV D/C Transmission Line from Grid Station Katra to Gran (Reasi) for Konkan Railways etc.

Further, the SAC directed the Forest, Ecology and Environment Department undertake a comprehensive physical and financial audit of the CAMPA works through the Monitoring and Evaluation wing in the PCCFs office.