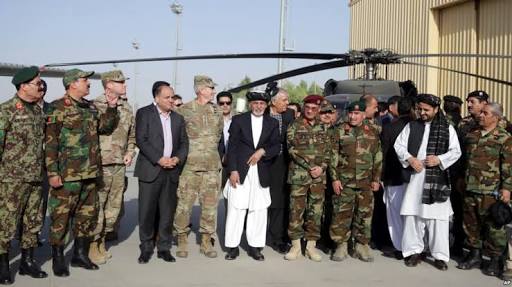 WASHINGTON: The United States Secretary Mike Pompeo on Tuesday said that the Trump administration is ready to discuss the role of US and international forces in Afghanistan if Taliban participate in peace talks, The Dawn newspaper reporter.

Encouraged by the pictures of Taliban rebels and Afghan soldiers saying Eid prayers side by side, the top US diplomat also offered to work with the Afghan government and the Taliban to end the 17-year-old war.

“As President Ashraf Ghani emphasised in his statement to the Afghan people, peace talks by necessity would include a discussion of the role of international actors and forces,” said Pompeo while referring to a recent statement by the Afghan leader.

“The United States is prepared to support, facilitate, and participate in these discussions.”

The Taliban demand the withdrawal of international forces from Afghanistan, insisting that there can be no peace as long as there are foreign forces on the Afghan soil.

The US diplomat, however, emphasised that all talks must include the Afghan government.

“The United States stands ready to work with the Afghan government, the Taliban, and all the people of Afghanistan to reach a peace agreement and political settlement that brings a permanent end to this war,” said Pompeo in a message issued after Eid holidays.

The statement makes it clear that Washington has no intention to abandon the setup in Kabul in which it has invested heavily and has lost more than 2,000 US soldiers and contractors in defending it.

Last week, the Taliban accepted an offer by President Ghani to stop fighting for seven days to allow all Afghans to celebrate Eid in peace.

The acceptance led to the first-ever ceasefire in 17 years and media reports from Kabul and other Afghan cities noted that the government allowed the rebels to return to their families to celebrate the festival.