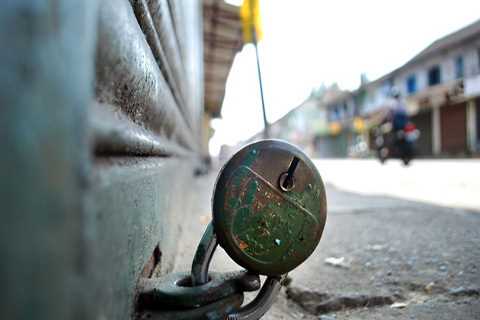 A complete shutdown was observed in Kashmir against the civilian killings while as another civilian succumbed to his injuries on Tuesday at the SMHS hospital here in Srinagar, thus raising the toll of civilian killings to six.

The killed youth has been identified as Sufail Ahmad Bhat (18), a resident of Daichoo Nagbal village of south Kashmir’s Shopian district.

He was injured during the clashes with government forces’ in South Kashmir’s Shopian district on Sunday.

Faisal, according to hospital sources had sustained bullet injuries on his neck during the clashes with forces’ on Sunday.

After the news of Sufail’s death reached to his native village, thousands of people from Shopian and adjoining areas thronged to his residence to offer funeral prayers.

As soon the body of the youth reached to his village, the clashes broke out between the locals and government forces’ in which almost half a dozen were injured.

Meanwhile, in the wake of the strike call given by Joint Resistance Leadership (JRL) against continious civilian killings by the goverenment forces, a complete shutdown was observed in Kashmir valley on third straight day on Tuesday.

The normal life came to a standstill as all schools, shops, business establishments are closed in all districts of valley.

Internet and train services continued to remain suspended for the third straight day in valley.

Clashes were reported in Pantha Chowk area of Srinagar after the government forces allegedly tried to enter the local mosque and stop anthems being played on loudspeakers.

The witnesses said that the forces in an attempt tried to enter the local mosque and stop the “taranas”  (anthems) being played from its loud speakers.

Locals showed resistance and did not allow them to enter the mosque resulting to clashes with the forces.

Five militants were killed in the encounter between forces and militants in Bandigam village of Shopian, in which five militants include top Hizb commander Sadam Paddar, and missing KU professor Rafi Bhat were also killed.