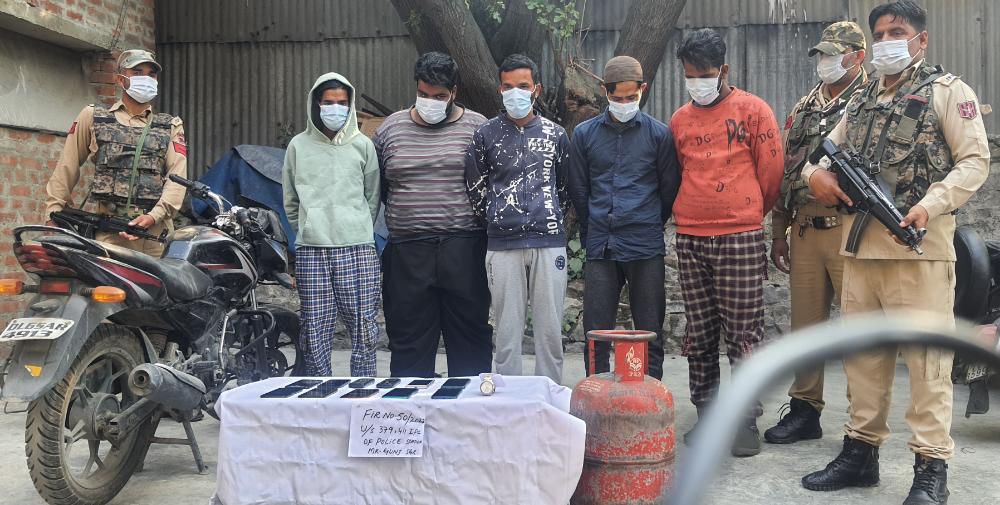 Srinagar, Oct 13 Police on Thursday said that it has busted a gang of mobile and Car thieves in Kashmir capital Srinagar.

The police in a statement said that a written complaint was received by Police Post Banmohalla from one Owais Amin Najar son of Muhammad Amin Najar resident of Shahwari Srinagar regarding the theft of his vehicle.

The police said that upon this a Case FIR No. 50/ 2022 U/S 379 IPC was registered in Police Station MR GUNJ pertaining to the theft of one vehicle bearing registration No. JK05B-2105.

During the investigation of the instant case and technical assistance received from North police lab, 5 suspects were picked up for questioning by PP Banmohlla, he said.

During sustained questioning along with SHO MR Gunj, they disclosed their involvement in the said case and many other theft cases.

Police said that during interrogation, stolen items including a black motorcycle (Discovery) DL6SAR/ 4913, two Vivo, two ‘Redmi’, one ‘MI’, two ‘Oppo’, one ‘Gionee’, one ‘Samsung’, and one ‘Jio’, cell phones, one ‘Titan’ wrist watch and an LPG cylinder were recovered from them.

The investigation of the instant case is going on and more recoveries are expected, police said.