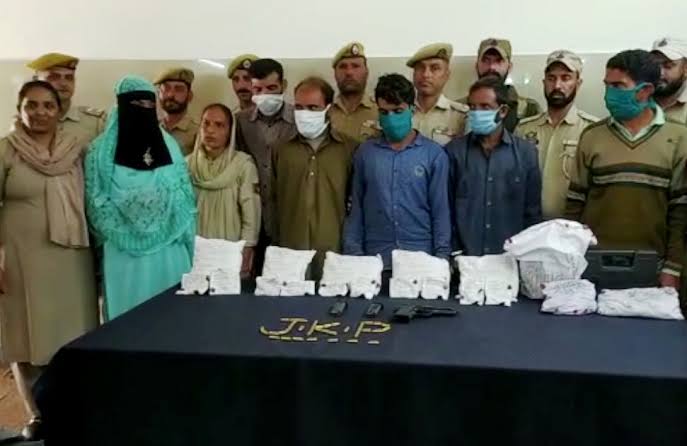 Poonch, Oct 07: Jammu and Kashmir police in Poonch claimed to have arrested five militant associates and said that an Improvised Explosive Device (IED) and a pistol have been recovered from their possession.

Addressing a press conference, Senior Superintendent of Police (SSP) Poonch, Rohit Baskotra said that on 28th of September, an information was received from BSF about the presence of some suspected person carrying an IED like substance in Poonch for planting somewhere and endangering lives of innocent, security personnel.

Accordingly, all the sister agencies and ground sources were activated for early and timely action and the information was further developed and corroborated by PC Poonch under the supervision of Deputy SP Manish Sharma and it was found that a bag containing steel box having an IED fitted in it has been kept by some unknown person in Prade Park Poonch.

On this, police along with officials of BSF, CRPF, lady police of women cell and Bomb Disposal Squad tactfully recovered the IED from the spot and diffused it and one lady namely Zaitoon Akhter (35) wife of Mohd Azad resident of Qasba was apprehended from the spot and was brought to police station Poonch for questioning, he said.

A case under FIR number 202/2022 under sections 4/5 ESA act was registered at Police Station Poonch and investigation was taken up, police said.

During sustained questioning and interrogation, she disclosed that this IED was brought by her husband namely Mohd Azad, son of Faiz Mohd resident of Qasba, SSP Poonch Rohit Baskotra added.

Special teams were constituted to nab Mohd Azad, who was arrested in the instant case and during initial interrogation, he revealed that he along with one person namely Qamar Din son of Mohammada resident of Kirni are in touch with their relatives in Pakistan and his maternal uncle namely Bashir Ahmed @ Tickka khan is associated with LeT and HM militant outfits, SSP informed.

“During the course of investigation on the disclosure of Qamar din, one pistol, two Magazine and 43 rounds were recovered from Kirni in the presence of Executive Magistrate,” SSP said.