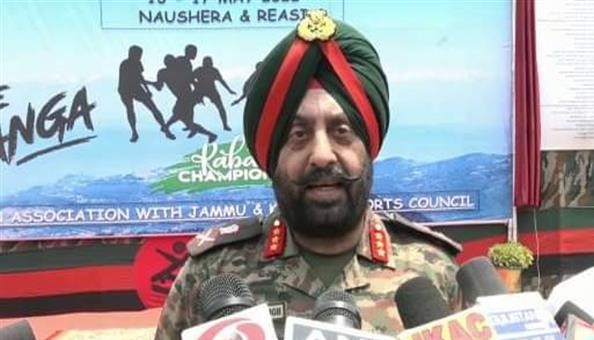 ‘Jammu, Sep 28: Stressing that ‘a whole approach of  nation’ is needed to save the youth of Jammu and Kashmir from getting radicalized, General officer Commanding (GoC) White Knight Corps, Lieutenant General Manjinder Singh on Wednesday said the Army playing its part to bring youth into mainstream to ensure peace and development.

He said radicalisation is a phenomenon under which the enemy of the country is making efforts to dislodge youth (of Jammu and Kashmir) from the right path and take them on the wrong path.

“To save them (from getting radicalised), we need a whole of nation approach,” he told a press conference at the Golden Jubilee celebrations of the White Knight Corps (16 Corps).

“Lt Gen Singh said the whole of nation approach involves participation of family, society, religious leaders, and teachers to prevent the youth from getting radicalised. The Army is helping them.”

“We remain active on this front on social media. In joint efforts with police, we identify hostile profiles and undertake counselling of several of them,” he said. The radicalised youths are booked as over ground workers (OGWs) of terrorist organisations and dealt accordingly, he added.

The GoC said, “To get the youth into the mainstream is the agenda of the government and the Army is aligned to it, because it will take the youth on the path of development and peace. The enemy will not succeed in its agenda”.

He said the Army organises educational, sports and cultural initiatives to provide opportunities to the youth so that they do not fall into the trap of radicalisation being initiated by the adversary through social media campaigns.

Attacking Pakistan, he said the country launched the “thousand cuts” plan to disturb peace in Jammu and Kashmir in the 1990s.

“They wanted to bleed India through a thousand cuts but the troops of the White Knight Corps stood up against it. Today, we see peace progress and development in Jammu region. One thousand terrorists have been killed in the region since then,” he said.

Replying to another question about the challenges that the Army is facing, he said, narcotics are being smuggled from across the border in addition to weapons and infiltration bids.

The Army is capable of stopping it and has a surveillance grid, fencing and soldiers performing 24-hour duties so that the enemy is not able to infiltrate, he said.

The second challenge is the enemy using vulnerable points on the LoC for infiltration, he said.

“Pakistan is trying to infiltrate terrorists, and smuggle ammunition and narcotics. But we have a counter-terrorism grid to ensure the terrorists are eliminated,” he said, adding that it was a “good thing” that the people of the south of Pirpanchal were “anti-militants”.

“We have seen no support (for militants) from the population and this is a healthy sign for us. We want to encash on it,” he added.

On the issue of use of drones by Pakistan to drop weapons and narcotics here, he said the phenomenon is more common in Punjab.

“There is less sighting of drones in our (White Knight Corps) areas and we suspect the ones seen here are a reconnaissance by the enemy, hence we are soon getting an anti-drone mechanism, he said.

“We have our plans. Equipment is coming in order to foil drone threats,” he said.

The White Knight Corps, raised on June 1, 1972 by Lt Gen J F R Jacob, its first Commander, has a rich history of valour in war and has also performed commendably in counter insurgency operations.

Several events marked the day, including an awe inspiring display of attack helicopters Rudra and an enthralling display of free fall skydiving from the Army Adventure Wing.

A dog show, band display and weapon display were also organised as part of the event.kno