Not possible to restore Article 370: Azad

"My party will not merge or join other party" 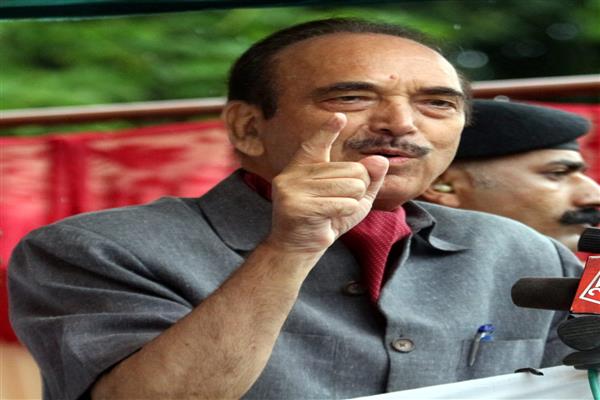 Srinagar, Sep 11: Former Chief Minister Ghulam Nabi Azad on Sunday said that he will announce the formation of his new political party within 10 days.

Addressing a public meeting in north Kashmir`s Baramulla town, Azad said that his political agenda includes restoration of statehood, land and jobs for the locals as these are achievable objectives. “Few people have blamed me for voting in favour of the Article 370 abrogation motion brought in by the home minister,” he said, adding that he have voted against the abrogation and these people who have no idea about the working of Parliament are saying that I voted against Article 370,” he said.

“To restore Article 370 would need around 350 votes in the Lok Sabha and 175 votes in the Rajya Sabha. “This is a number no political party has or is likely to ever get. The Congress has shrunken to less than 50 seats and if they speak of restoring Article 370, they are making false promises,” he said.

He said that his new party will be free with independent Ideology and it will not join or merge with any other. He futher said the emphasis will be to struggle for the restoration of Jammu and Kashmir’s statehood and protection of job and land rights of its people.

Notably, this was Azad`s first public meeting in Kashmir after he resigned from the basic membership of the Congress party.

On Saturday, Ghulam Nabi Azad convened an all-party meeting in Jammu and claimed that delegations from 30-35 Assembly constituencies pledged their support to him. kns