Allowing non-locals to vote in J&K will be disastrous: Farooq Abdullah 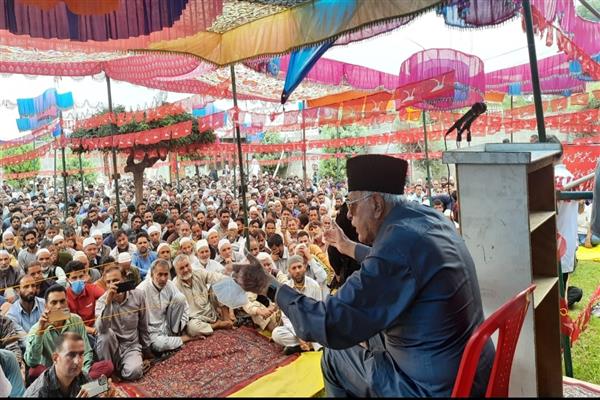 Srinagar September 05: The Jammu and Kashmir National Conference President and MP Srinagar Dr Farooq Abdullah on Monday asked people of J&K to start registering as voters to thwart the underway efforts aimed to disempower them.

This he said while addressing a one day workers convention at Chitragam in Shopian.

Allowing non-locals to vote in J&K will be disastrous, said Dr Farooq, adding that the powers that are pitted against NC are so insecure about support from genuine voters of Jammu and Kashmir that it has to import temporary voters to win seats. “None of these things will help them when the people of J&K are given a chance to exercise their franchise. It is for the permanent residents of Jammu and Kashmir not to allow them succeed in their nefarious designs. It is for you to stop them from achieving that end. No one else can. If people come out and register as voters and subsequently vote in huge numbers, there is nothing that can touch our unique identity. But if all of us chose to stay in our homes, there is nothing that can save us. Therefore, this time the elections are not just about having elected governments, forming ministries. It is all about protecting our identity and dignity. We have to send such representatives to the legislature, who would not trade-off people’s dignity, and honour,” he said.

There is no substitute to NC, when it comes to protecting regional pride and dignity of Jammu and Kashmir, he said, adding that the party has long been seen as a tell-tale symbol of the region’s political and developmental aspirations. “Our people, whether they are Kashmiris, Dogras, Gujjars and Paharis, remain deeply attached to their sense of history and to their identity. People’s immense faith in our party is a reckoner of profound disillusionment of people with the policies of ruling dispensation. The best way to resist such forces is through a democratic process,” he added.