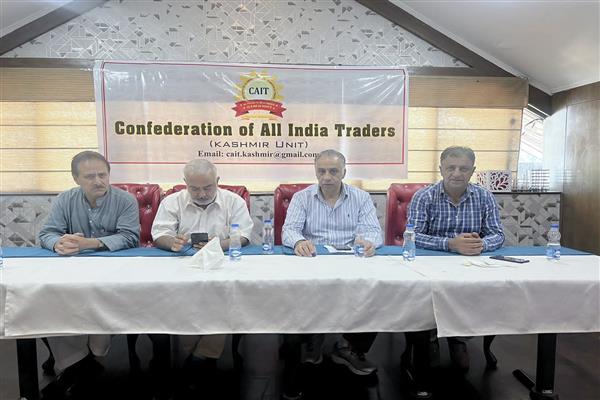 Srinagar: The recently nominated working body of the Kashmir province of the Confederation of All India Traders (CAIT), which is the apex body of the trade community in the country, held meeting with traders from different districts of the valley.

In a handout, the CAIT (Kashmir province) said: “The meeting held on June 26 discussed the stress situation of the markets in the valley and how to revive it with regard to all districts from Kulgam to Kupwara.”

“The issues of financial institutions like banks, service taxes and awareness on GST were also discussed threadbare at the maiden meeting and all such issues will remain at the priority whenever any meetings are held with the administration,” the handout added.

It’s pertinent to mention that the CAIT is apex body of traders in the country representing some eight crore traders and forty thousand trade associations and chambers across the county.

The CAT said the issues of all the districts of Kashmir will be taken onboard for decision making from time to time with the sole motive of betterment of the shopkeeper community in particular.