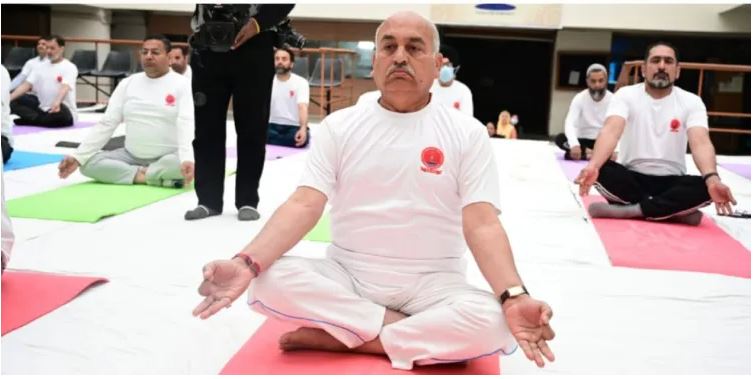 The theme of this year’s Yoga Day is ‘Yoga for Humanity’.

The Chief Justice stressed upon all the participants to include Yoga in their daily life to remain physically and mentally fit besides relieving themselves from stressful life.

Justice Pankaj Mithal highlighted that making yoga a way of life would go a long way in the discharge of judicial functions and enhancing the efficiency and efficacy of not only the judicial officers but also all the stakeholders.

Likewise, a programme was held at High Court Complex Jammu which was led by Justice Rahul Bharti, Judge High Court of J&K and Ladakh.

Similar programmes were held in all the Subordinate Courts of UTs of Jammu & Kashmir and Ladakh wherein a large number of participants performed Yoga Asanas along with Yoga instructors who also described their importance and impact on the flexibility of human body and mind.

During the programme, while proposing vote of thanks, Registrar General, Sanjeev Gupta extended gratitude to Hon’ble Chief Justice for organizing such an event in all the judicial establishments of the UTs of J&K and Ladakh and also in the High Court wings of Srinagar and Jammu.

He also appreciated the participation of large number of advocates and staff members in making the event a grand success.

The Registrar General also recognized the expertise with which the yoga instructors imparted training to the participants in performing Yoga Asanas.