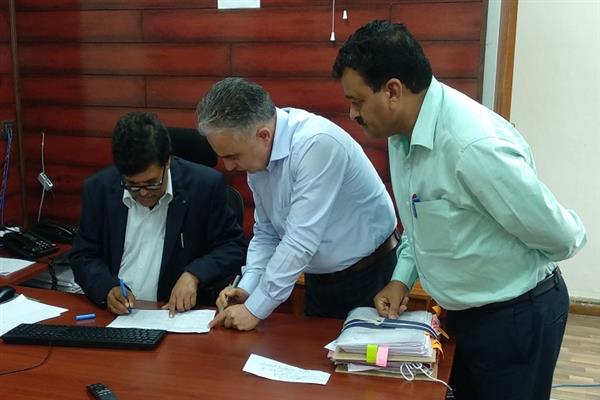 According to Principal Secretary School Education Department, B K Singh, a rigorous interaction procedure was employed for the first time in the history of Education Department to choose the academic staff in order to make SCERT as the “Number one institution” of the country.

Singh emphasized the importance of teacher training while commenting on the selection process, saying it is ‘critical to assess the potential of individuals who would be chosen for the job’.

According to Dr Tasaduq, teachers must be trained periodically in between employment to introduce them to modern pedagogies so that they can model them for their students.

“Using the same teaching style for a long time can develop a pattern that is dull to the students,” he stated. “As a result, the department decided to select a better training staff.”

Mohammad Sharif Dedhar, who recently joined the SCERT as Joint Director, stated that his efforts would be to make the most of the newly appointed academic staff. “We put in a lot of efforts in selecting the right people to make SCERT a formidable teacher training institute,” he said. “As soon as the new faculty members arrive, we’ll get things started in the right direction.”

Associate Professor, Fayaz Ahmad Fayaz, explained the selection procedure, saying that the J&K SCERT was formed as a Society by merging two State Institutes of Education (SIE) in the Jammu and Kashmir divisions, as per Government Order No: 197-Edu of 2020, dated 06/09/2020.

“The SCERT in J&K was long overdue, as SIEs were evolved into SCERTs across the country during the 1970s, 1980s, and 1990s,” he said. “Staff selection was a difficult issue after the Society was founded.”

Fayaz stated that the first phase of the selection was completed in Jammu recently, where the staff for the Central Move Office and Divisional Office was chosen through a similar process.

“The selection procedure for the second phase began on Friday, June 10 at S.P. Higher Secondary School and completed today at the civil secretariat,” he explained. “We’ll release the list of selected personnel as soon as possible.”

In addition, Fayaz stated that the SCERT is responsible for implementing all NCERT initiatives.

“All of the existing 20 District Institutes of Education and Training (DIET) have been placed under the direct supervision of several SCERT wings, which operate under the administrative authority of an independent Director,” he said adding that “The Council’s mission is to assist academics and resources at the grassroots level.”