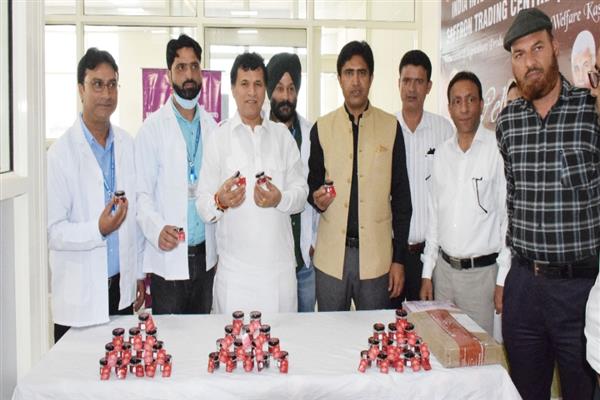 On the occasion, the Minister said that the Central Government is ready to provide all possible help and support to the farmers. “With the existence of Spice Park, the income out of saffron production of growers has doubled. Center will provide all kind of facilities and assistance to the farmers for a prosperous life,” he added.

Choudhary said that the Government of India and the J&K government is keen to widen the growth of agriculture as well as horticulture sectors that are vital towards transforming lives of the farming community. He maintained that these sectors can transform the economy of the UT tremendously over the next decade by creating numerous job opportunities, reducing poverty and backwardness besides increasing the production to facilitate optimum economic growth in a peaceful and eco-friendly manner.

The MoS said that Central Government brings hope for the agriculture sector of Jammu-Kashmir that aims at doubling the farmers’ income in a planned manner. “The strategy is to focus on encouraging the cultivation of High Yield and High Density crops, use of modern technology and other measures,” he said.

The Minister said that the government has also laid special focus on farm mechanization which is another area instrumental in transforming the agriculture sector which will help farmers to enhance their production manifold.

During his visit, Choudhary met and listened to the issues of various stakeholders including saffron growers, NRLM beneficiaries, progressive farmers and FPOs. They put forth their demands and projected many other issues of public concern. The Minister assured the delegations speedy resolution of their genuine issues.

“Government of India has already been working on various flagship programmes aimed at uplifting socio-economic status of the people. Only self-sufficient villages can help fulfil Prime Minister Narendra Modi’s vision of ‘Atmanirbhar Bharat’ and for that it was important to focus on small farmers,” he said.

To help farmers increase their income, the government has announced an agriculture infrastructure fund of nearly Rs 1.50 lakh crore under the Atmanirbhar Bharat scheme to ensure infrastructure development in villages, the minister said.