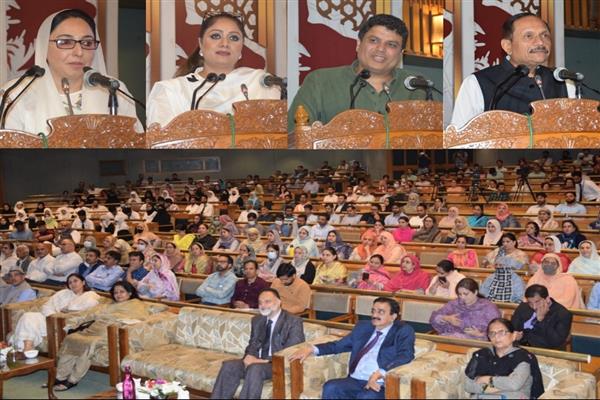 SRINAGAR, JUNE 9: To highlight and propagate the teachings of Sufis and Rishis in Kashmir, a three day Sufi festival kickstarted here today.

The festival is being organised by the Tourism Department in collaboration with the Department of Culture, Waqf Board, KVIB, Archives and Archaeology, J&K Academy of Art, Culture & Languages, Kashmir University and Higher Education Department.

Advisor to Lieutenant Governor, R R Bhatnagar was the chief guest at the inaugural function.

During the 3-day festival, programmes will be organised at Chashma Shahi, Pahalgam and SKICC highlighting the teachings of Sufis and Rishis.

At the inaugural ceremony, speakers highlighted that J&K has been bestowed with rich cultural treasure and said that there is a need to understand the importance of valuing our heritage and make it part of day to day life. They also emphasised on the need for sharing the legacies of Saints with the rest of the world.

Speaking as Chief Guest, Advisor Bhatnagar said that Sufism is a way of realisation of inner self and our Sufis and Rishis have shown us the path towards that goal. He said that Sufism propagates the doctrine of love, compassion, peace, development for mankind, irrespective of any biases and prejudices. He further said we must understand the essentials of Sufism as this gives us an idea of what is beneficial for humankind.

Dr Darakshan Andrabi also emphasised on the need for propagation of teachings of Sufis and Reshis and said that more such events will be organised in the coming times.

Secretary Tourism, Sarmad Hafeez, in his welcome address dwelled on the influence of saints and Rishis on the rich heritage of Kashmir. He said that it is the endeavour of the Tourism department to give the people an all-encompassing experience as tourism not only includes people and places but it also includes our culture, ethos, heritage, cuisine.

He further said that we need to reconnect with our past and the Tourism department has succeeded to a large extent in reintroducing ourselves and added that the department will be organising several events over the next three days in this direction.

VC KVIB also spoke on Sufism in Kashmir and the crucial role played by the Sufis in the economic upliftment of the people. She said that the shape and character of Sufism that ultimately arose in Kashmir was totally native which acts as a bridge for brotherhood, fraternity among all the sections of the society.

She said that the essence of Sufism has been accommodation and tolerance which spread in our country through the teachings of Saints. These teachings were instrumental and influential in the economic, social and philosophical development of India, she added.

Professor G N Khakhi in his paper said that we should not remain aloof to the teachings of our Sufis but imbibe their sayings in the real sense. He said that they have been the torch bearers of secularism and have cemented the bond of humankind. He said that Rishis and Saints have unanimously advocated multi-ethnic social structure strictly according to the divine message. He said that the need of the hour is to organise such seminars and let people know about our Sufis and Rishis so that our younger generation will get enriched with their teachings.

On the occasion, a mystic gallery was also set up where traditional artefacts and manuscripts, musical instruments were showcased. Tourism department also showed a video presentation on Sufism “A Journey through Mystic Kashmir”.