Potholes on Rambagh-Jahengeer Chowk flyover give tough time to commuters 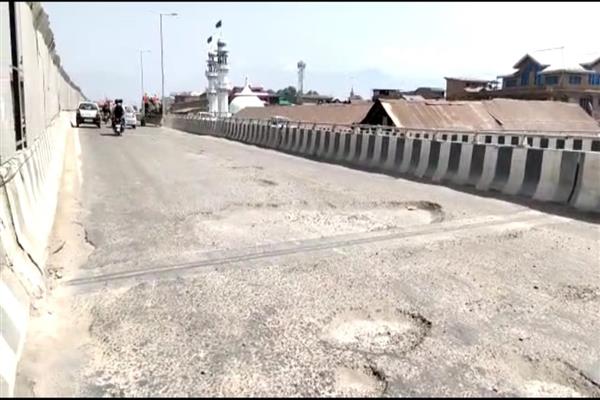 Srinagar, June 02: Potholes on the Rambagh-Jahengeer Chowk flyover have been giving tough time to commuters, who daily commute on this route.

A commuter said that potholes on the flyover have become a major reason for frequent traffic jam on this route and it has been giving tough time to daily commuters.

He said that these potholes hamper smooth driving and thereby result in frequent traffic jam on this route.

Commuters said that though this flyover was constructed to avoid frequent traffic jam, however, due to huge potholes that have developed at several places on this flyover has made things even worse for daily commuters.

“Potholes have developed at many places in this flyover, which hamper smooth driving and becomes a major reason for traffic jam on this route. Every day we could see vehicles lined up on this route, as everyone tries to avoid these potholes, which in turn results in slow driving, thereby results in traffic jam,” they said.

The said that such scenes can be witnessed everyday and people commuting on this route are put to lot of inconveniences.

The commuters appealed to the concerned authorities to look into the matter at an earliest so that commuters can heave a sigh of relief. _____kns