90% delimitation process is over, after completion elections will be held in J&K: BJP leader 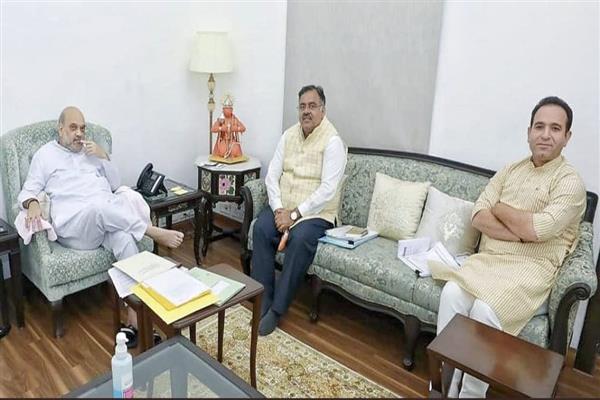 Jammu, Mar 03: Bhartiya Janta Party’s (BJP) Jammu and Kashmir general secretary, (Incharge Kashmir Division)Sunil Sharma on Thursday said that bureaucracy cannot be an alternative for popular government in any democracy and that elections will soon be held in J&K.
On Wednesday, Sunil Sharma had met Union Home Minister Amit Shah in New Delhi to discuss several issues including revival of Village Defence Committees.
After returning from Delhi, Sharma said that holding elections is the job of election commission and the centre government.
“Elections are the basis of a democracy. 90 percent process of delimitation in J&K has been completed and after that elections would be held in J&K,” he said.
He also said that that bureaucracy cannot be an alternative for popular government in any democracy and people need an elected government that can solve their issues.
Taking a dig at NC and PDP, Sharma said both parties have been in alliance with the BJP in Jammu and Kashmir and those who know the history must be aware of the facts. “Both the parties have enjoyed ministries during their alliance with the BJP,” he said.
He also said that these parties have always played politics on petty issues and now People of Kashmir have understood their agenda and this time they will give them a befitting reply during elections.
On being asked about PAGD’s white-paper, Sharma said that PAGD leaders have not slept peacefully since August 05, 2019, when J&K Reorganisation Act came into effect.
“BJP is not bothered about their white paper and the party only has one aim and we are working towards our mission.”
He said that BJP will save the lives of the people at all costs, be it through strict measures like curfew, BJP will do that. “BJP has been able to save the lives of civilians in Kashmir since 2019,” he added.
Regarding Ghulam Nabi Azad, Sharma said that he has his personal choices.If he thinks that he can establish a new party in JK, then BJP welcomes his decision.
In a democratic country everyone has the right to make or break a political party so he has every right and choice to launch his own new party, he added. kns