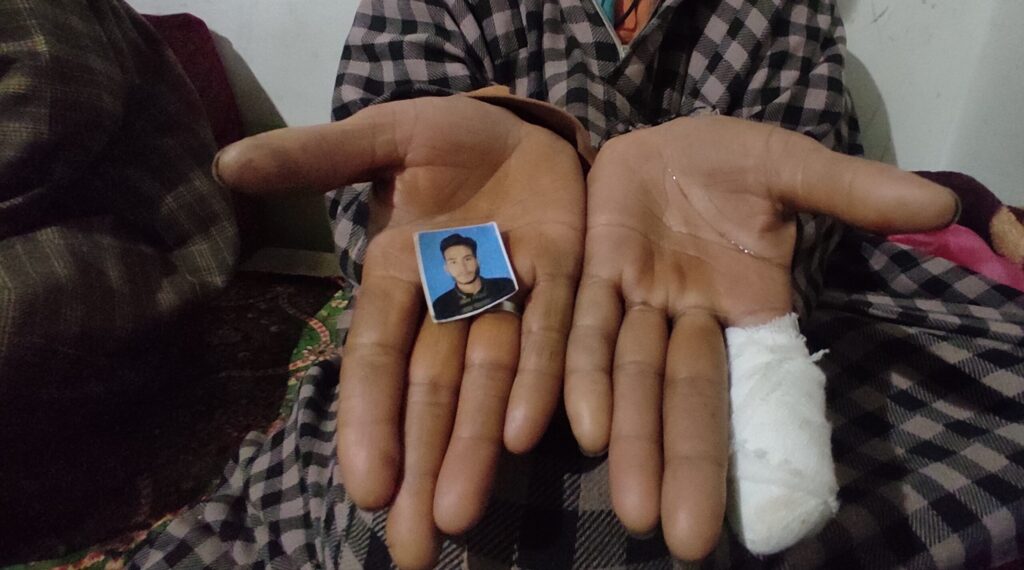 Anantnag, Oct 25: The family of Shahid Aejaz Rather, who according to the police was killed in a firing incident outside CRPF camp in Babapora area of Zainapora in Shopian district on Sunday, urged J&K LG Manoj Sinha to give them access to CCTV footage of the incident.

A resident of Nowpora Arwani hamlet of Kulgam district, Shahid, as per the relatives, was the sole bread earner in the family.

Muhammad Hussain Rather, Shahid’s uncle while said that they want to check CCTV footage of the incident to know whether their son was killed in target fire or in cross firing.

“As the incident has just happened outside CRPF camp so CCTV footage must be available which will clearly show whether there was any attack or not and was Shahid killed in target fire or in crossfire,” Rather said. “We urge the LG Manoj Sinha to allow us to watch the CCTV footage.”

Shahid’s father Aijaz Ahmad Rather said that his son was a 12th class student but due to poverty he wasn’t able to submit his examination fee.

“Due to poverty, he was working as a laborer. Around a week before he went to Reshiepora Zainapora to earn livelihood by plugging apples there and had to return home on Saturday but due to heavy rain, he wasn’t able to come and decided to return home on Sunday instead,” Rather said.

On Sunday morning, a local person was called by the concerned police station and enquired about Shahid, who later informed us about his killing,” he said.

“Soon we saw his picture on social media and identified him,” Rather said, adding that they rushed to the concerned police post who told us to wait up to 4 pm.

Rather said that the behavior of police at the police post was very kind and were saddened by his son’s death.

“We received his body at around 7: 30 pm and was laid to rest in a local graveyard,” he said.

“My son was never arrested and if any person will say he was involved in any wrong activity, then we don’t demand anything, but if he wasn’t wrong in any way then why was he killed,” Rather said.

Rather said due to the poverty, he had brought fruits and vegetables from the village where he was working.

“He was a very caring son but his killing has snatched everything from us,” he said.

“I have been operated thrice and have a fracture in hand and foot, how can I take care of four minors and my wife, ” he said, while requesting LG administration to help them in this time of grief.

“We don’t have any source of income and have just a single room to live in and now since yesterday’s incident we are living in neighbours house as we don’t have space where we can keep guests who are coming for condolences,” Rather said.

A senior police official said that Shopian police received information at around 1030 hrs on Sunday about an attack by militants on an Area Domination Patrol (ADP) party of 178 Bn, CRPF at Babapora, Shopian and killing of an unidentified person during the retaliation/cross firing by the CRPF party.

He said that preliminary investigation including examination of civilian eye-witnesses brought to the fore that the ADP party came under attack by militants.

Attack was retaliated, however, during the cross firing, a service rifle (AK-47) of a member of the ADP, who was at the rear end was snatched by one of the associates of militants, he said.

He added that he was challenged and ordered to stop. He, however, kept running towards the direction from where the ADP party was being fired upon and received bullet injuries in the cross firing. One member of the ADP party also received injuries.