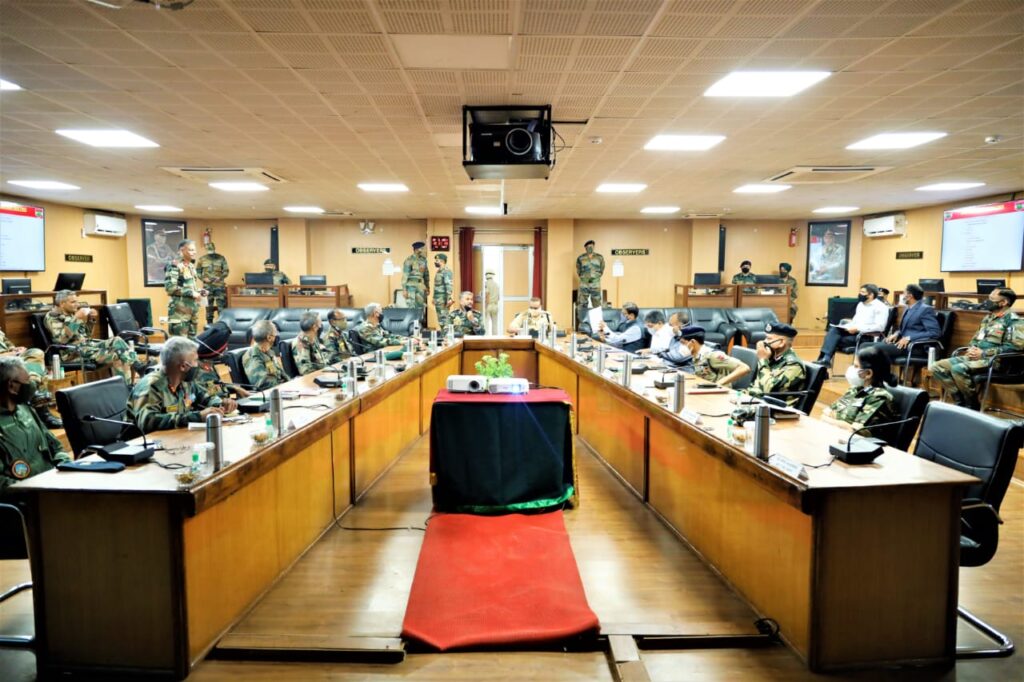 The officials shared inputs about the Line of Control and hinterland security situation, a defence ministry spokesman said.

“The officials stated that the ceasefire has improved the security situation along the border, however, intelligence inputs of militant launch pads and militant training activities in Pakistan indicate the need to be alert along the Line of Control,” he said, adding, “There are indications of heightened activity in last two months. The cross-border smuggling of narcotics and weapons continues to be focus of the intelligence agencies and security forces. This included continued vigil and checks on all passes leading to Kashmir valley.”

Review of violence indicators of first six months of the year show an improvement in all security parameters, the spokesman said.

“There is a joint security forces effort at targeting the OGW network that sustains (militancy) and focused effort by the police has led to apprehension of nearly 400 such persons,” he said, adding, “Local recruitment though lower than previous years, it continues to be the focus area of the security and intelligence agencies, “ he said in a statement to GNS. “The effort is to engage with the vulnerable youth and target the OGW network engaged in the recruitment process. The recruitment is higher in some pockets where synergised counter actions are being executed.”

The officials shared continued focus on vehicles of “dubious antecedents” as they are “used for transportation of arms and contraband, and also can be used for Vehicle Based IEDs.”

“The efforts of some (militant outfits) to use variety of IEDs are being proactively countered,” he said, adding, “Reports of encroachments along the national highway are being checked as these can cause security threat to the convoy movement on the highways.”

The officials discussed the issue of criminal acts being done under the garb of a militant attack and the need to differentiate between the two, he said. “The shift of militant’s modus operandi in targeting soft targets and counter measures were also discussed.”

The officials deliberated on the “propaganda effort by Pakistan and their antagonistic information warfare tactics”.

“Sadly, these efforts include propaganda to legitimize killing of Kashmiri civilians by the terrorists,” he said, adding, “The use of social media to spread disinformation is widespread and needs to be countered proactively by a joint effort.”

The DGP and Corps commander commended the officials present on improved security indicators, he said.

“A special mention was made on the measures taken to minimize the collateral damage in operations despite risk to soldiers. They called upon all to continue efforts at better intelligence, better preventive security measures and effective intelligence based counter terror operations,” he said, adding, “They called for continued efforts along with the civil society to counter the separatist propaganda and break the cycle of violence for long term peace in Kashmir.

Besides discussing various security situation, the core group also discussed the “satisfactory” handling of COVID-19 in Kashmir, the spokesman said.

“It was well appreciated that how National and State civil departments along with the security forces worked as a joint team and kept the pandemic under control when compared to the other parts of India during the peak of second wave. A brief stock of preparedness for the likely third wave was taken.”

The Divisional Commissioner, he said, shared details of development activities underway and the efforts to energies and operationalize the grassroot democratic structure. “He shared the plans for youth engagement which included the plans to setup youth centers in all districts and down to panchayat level.”