“Idea of ushering peace & prosperity in J&K is elusive until Articles 370, 35-A aren’t restored”: NC 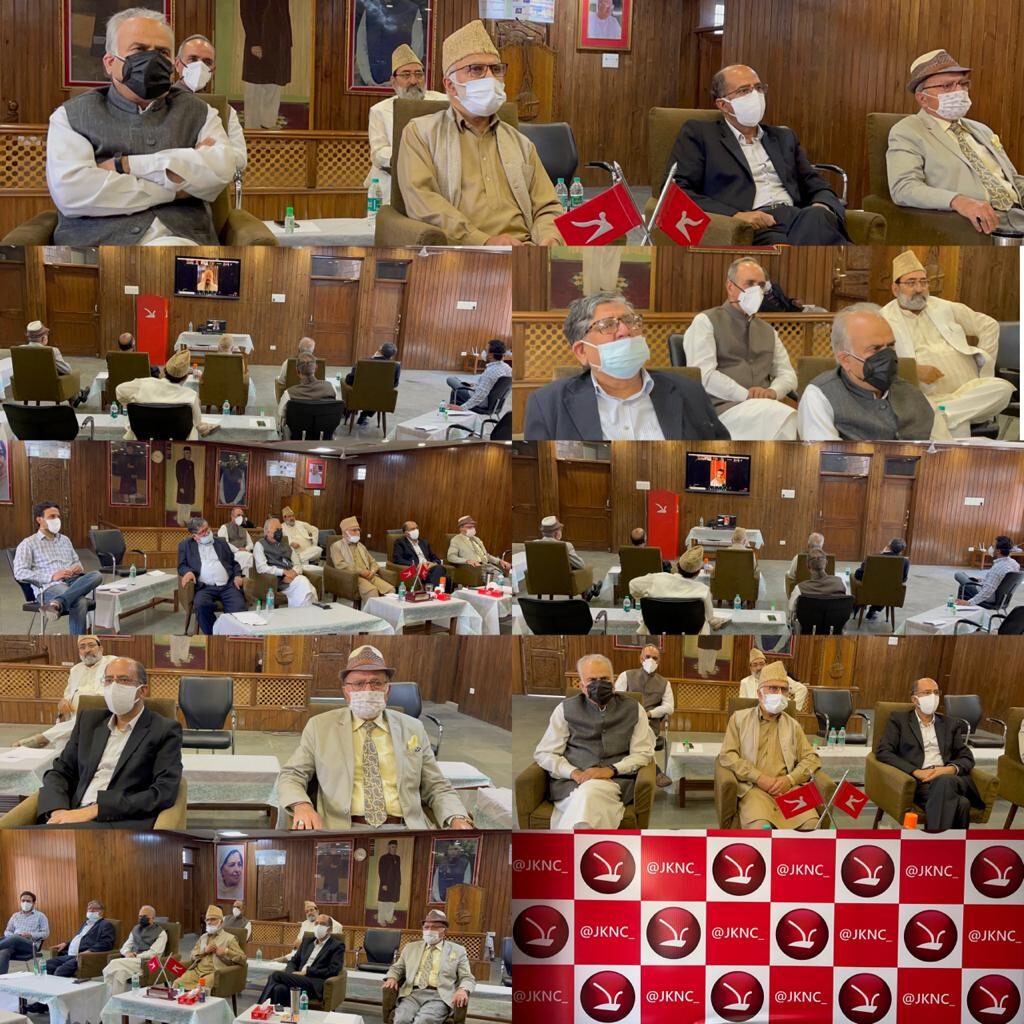 Srinagar, May 27: The Jammu and Kashmir National Conference Party President Dr. Farooq Abdullah on Thursday presided over a virtual meeting of the party’s central working committee, where party affairs, Covid situation and future course of action dominated the interaction.

During the course of a marathon six hour working committee meeting, the working committee members discussed party affairs and also deliberated on the prevailing political situation in Jammu and Kashmir. The members present in the meeting reflected on the far-reaching political, economic consequences confronted by the people of JK in the shape of skidding the economy from the path of growth and soaring unemployment. The plight of people engaged in unorganized labour and services sectors also resonated in the meeting, where the party president listened to the concerns raised by each respected member. Besides that, threadbare discussions on recovery and containment from the looming uncertainty were also deliberated upon by the members. While interacting with the members, the party president called for collective action to combat the pandemic. He exhorted the functionaries to lend all support to the ongoing battle against the Covid Spread. With the disease in full swing, Dr. Farooq called for a sustaining zero-covid strategy to eliminate the deadly virus from the region.

Dr. Farooq stressed on the mitigation and compensation of the losses incurred by the people of J&K due to the current situation. Stressing on unity and common purpose as a potent weapon to combat the virus spread, he said the ongoing situation is a call to action for everyone to work together with political class no exception to it. He appreciated the health workers on the frontlines and the personnel manning essential services for their spirit of collaboration saying the efforts of the lacs of ground staffers, health workers and other frontline workers portrays the truism about indisputability of collective action in combating the emergencies. On the occasion, he also appreciated the efforts undertaken by party members, MPs on supporting the ongoing battle against covid. To bring respite to the people, he called for financial incentivization and an inclusive Covid sustenance and revival policy.

Party Vice President Omar Abdullah, apart from raising other issues, expressed sympathy with the families whose loved ones were devoured in the current Covid pandemic.

While interacting, the members raised the issue of development deficit, administrative inertia, brutality against tribal community and infringement of their forest rights, widespread unemployment, plight of traders, horticulturalists and marginal artisans and hawkers, impressing upon the incumbent JK government to govern the people by the principles and rules laid in the constitution of the country.

On the occasion, the members reiterated that the path of progress and peace cannot be achieved until GOI addresses the political and developmental aspirations of the people of J&K. The leaders said that there can be no trade off between the development and political aspirations of the people of J&K. on the occasion, the party WC members unanimously adopted the following resolutions:

Conveyed sympathies with the families who have lost their loved ones to the virus and expressed concern over the response of the incumbent administration in tackling the biggest ever public health crises in the forum of Covid-19.

The members sought restoration of Articles 370, 35-A. The resolution noted that the idea of ushering peace and prosperity in Jammu and Kashmir is elusive until Articles 370, 35-A aren’t restored as the articles bore great psychological and symbolic significance for the people of Jammu and Kashmir; more to the point the articles also display India’s asymmetric federalism, which grants differential rights to certain federal sub units, often in recognition to their distinctive identity and historical background. The early restoration of Articles will not only save the people, particularly the youth from going on the terminal path of disillusionment but will also restore a sense of entitlement to them.

Expressed concern over the spread of the Covid-19 in J&K and its resultant impact in terms of loss of precious lives, back-sliding of development and ruining of local economy. The members unanimously called for a long term financial incentivization and inclusive revival program and short term Covid- care and sustenance plan for affected people to tide over the losses incurred by them.

Expressed concern over the unabated rise in the unemployed educated, and Skilled youth of Jammu and Kashmir, saying never has the youth of J&K felt so disempowered, dejected and discarded as it is at present. The resolution demanded taking of immediate steps to give a sense of belonging to the local youth to help them achieve their full potential and through them enable Jammu and Kashmir a rightful place in the union of states within the country.

Rued widespread unaccountability on ground in Jammu and Kashmir and Ladakh attributing it to the unconnected and airdropped bureaucrats, unconscious and unacquainted to local topography and developmental needs of people.