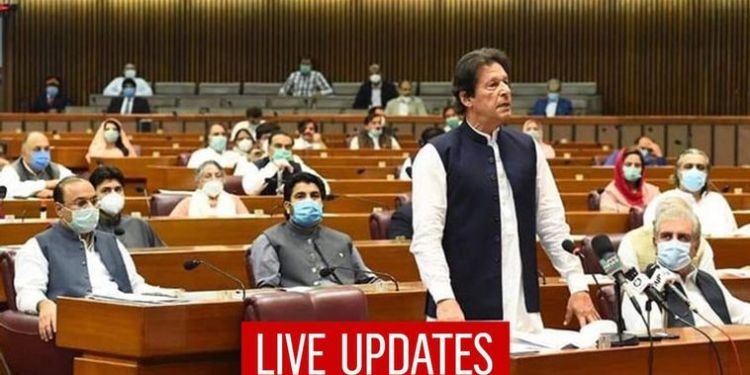 Srinagar, Mar 06:  The Prime Minister of Pakistan, Imran Khan has won the vote of confidence in National Assembly by 178 votes on Saturday.

The special session was called in a show of strength by the premier himself after his party lost a crucial seat in the senate elections. The premier needed 172 votes to win the confidence vote.

Announcing the results the speaker of Pakistan Assembly said that eight years ago Prime Minister Imran Khan had been elected to the post with 176 votes today he has secured 178 votes.

Earlier lawmakers, including PM Khan arrived at the parliament house while PTI supporters and PML-N leaders gathered outside.

According to Pakistan media tensions are high as both sides became confrontational and PML-N leaders alleged they had been manhandled.

Prime Minister Imran Khan had announced earlier this week that he would seek a vote of confidence from his party lawmakers, following an upset in the senate elections on March 3.

While the ruling PTI made gains, it experienced a shocking upset on the Islamabad seat where PPP’s Yousuf Raza Gilani bagged 169 votes, defeating the government’s nominee, Hafeez Shaikh, who received 164 votes, meaning that several ruling alliance MNAs had voted for the Pakistan Democratic Movement candidate.

This is the first time a prime minister has undertaken such an exercise after the passage of the 18th Amendment.

Prior to this, the law required every prime minister to take a vote of confidence from the Assembly within 30 days of being elected — a vote that Benazir Bhutto, Nawaz Sharif and other prime ministers of the past had to seek after their election. kdc