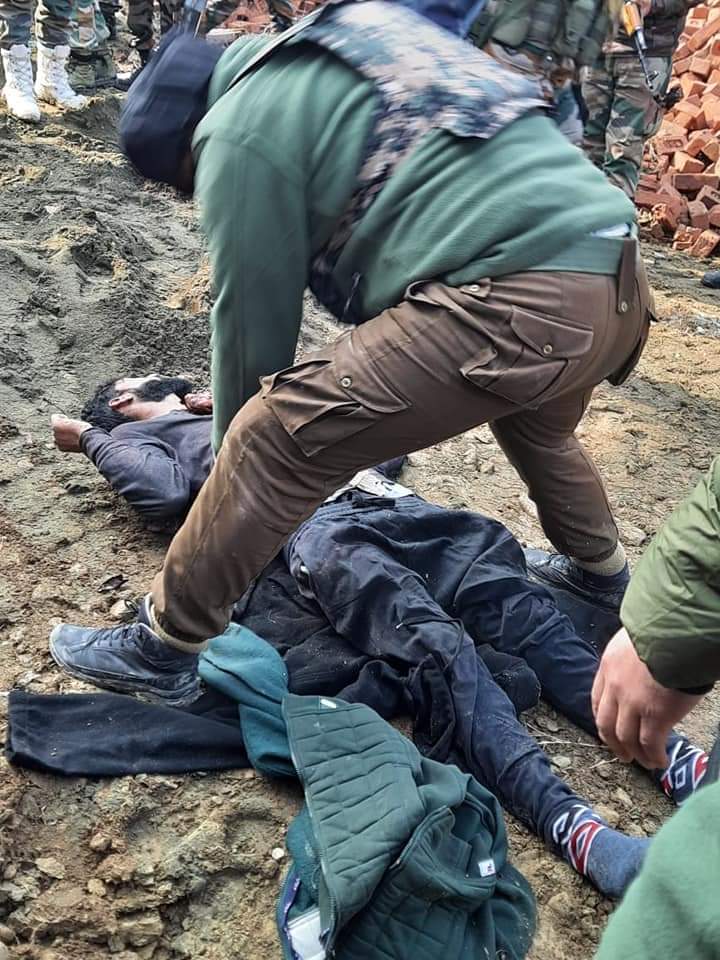 Srinagar, Dec 30:Three militants including the son of a police official were killed in an 18-hour long encounter at Lawaypora area of Srinagar outskirts, police said Wednesday.

A police official said that a joint operation was launched on the basis of a specific input about the presence of militants in Lawaypora area of Srinagar on Tuesday evening.

“As the suspected house was zeroed in, the hiding militants fired at the security forces triggering an encounter,” he said. “First contact with the militants was established at around 6 pm on Tuesday.”

The army’s 2-RR, police, and the CRPF decided to put the operation on a halt on Tuesday evening due to darkness but lights were installed and cordon layers were tightened to ensure that militants don’t flee. “

The militants had taken refuge in a concrete house just near the main road,” the official said.

He said that one-sided firing was on from the militants intermittently. “Final assault was launched with the first light of the day today (Wednesday) after which three militants were killed. The operation ended at 11:30 am,” the official said, adding that the bodies of three slain militants were retrieved along with one AK-47 rifle and two pistols.

The traffic on the Srinagar-Baramulla road was later restored at around 2 pm.

A police source identified one of the slain trio as Aijaz Maqbool, son of Muhammad Maqbool Ganai, a police head constable by profession, working in Ganderbal district of Central Kashmir.

A police spokesman in a statement issued here said that about 05:30 PM on Tuesday troops of 02RR launched a Cordon and Search Operation on a specific input near Hokersar where the militants hurled grenade on the searching party and fired indiscriminately on troops while laying cordon.

“On receipt of this information Srinagar police immediately along with Police Component Srinagar and Valley QAT CRPF rushed to the spot,” the spokesman said, adding that “search party of 02 RR was heavily fired upon by the militants hiding inside the building which was retaliated. Repeated announcements were made to the hiding militants to lay down their illegal weapons and surrender, instead the hiding militants fired continuously upon the searching party.”

The police spokesman said that due to darkness the operation was suspended however the cordon remained intact throughout night. “On December 30 morning, with the first light repeated announcements were again made to hiding militants to surrender, but they fired indiscriminately on security forces which was retaliated again resulting in elimination of militants.

“The operation ended at 11:30 am in which all the three hiding militants were killed. Upon their search, arms (One AK 47 rifle & two pistols) & ammunition and other incriminating material along with some documents were recovered,” the police statement read, adding that “From the recoveries their identity has been established as Ajaz Maqbool Ganie, Ather Mushtaq both residents of Pulwama and Zubair Lone, resident of Shopian.”

The police spokesman said that some families from South Kashmir came to PCR and claimed the slain to be their wards. “They have been sent to Ganderbal for further identification and participation in last rites in the presence of Magistrate,” the police spokesman said. “In this connection a case under relevant sections of law has been registered and investigation has been initiated.”

It is pertinent to mention that a few militancy related incidents have occurred in this area recently and reportedly these militants have also came from South Kashmir to target convey of security forces.

“People are requested to cooperate with police till the area is completely sanitized and cleared of all the explosive materials, if any,” the police spokesman said. He said that “although the three killed militants in today’s encounter were not mentioned in our list of militants, yet two of them were hardcore associates of militants–(OGWs)”.

“Pertinently, one of the two is relative of top HM commander Rayees Kachroo who was killed in 2017. Reportedly, third might have joined very recently. Generally parents don’t have idea about the activities of their wards. Several OGWs after committing crimes like grenade throwing & pistol shooting etc stay normally with their family,” the police spokesman said. “For instance, one student from Pulwama who was taking coaching in Srinagar was caught for lobbing a grenade with the help of CCTV’s footage. His parents were totally unaware about his militant activities.”

Police is investigating the case and after thorough investigation will come to the conclusion soon on merits, the spokesman said. “It is pertinent to mention here that the trio killed in today’s encounter were given ample opportunity to surrender both yesterday evening and today morning but they didn’t surrender and instead fired and lobbed grenades on search party,” the spokesman said.

Meanwhile, IGP Kashmir Vijay Kumar has requested the parents to keep close watch of their wards and keep strict vigil about their day to day activities to ensure that they may not indulge in any subversive or terrorist activities.