Pakistan PM, Army Chief vow to go all out for “repelling Indian aggression” 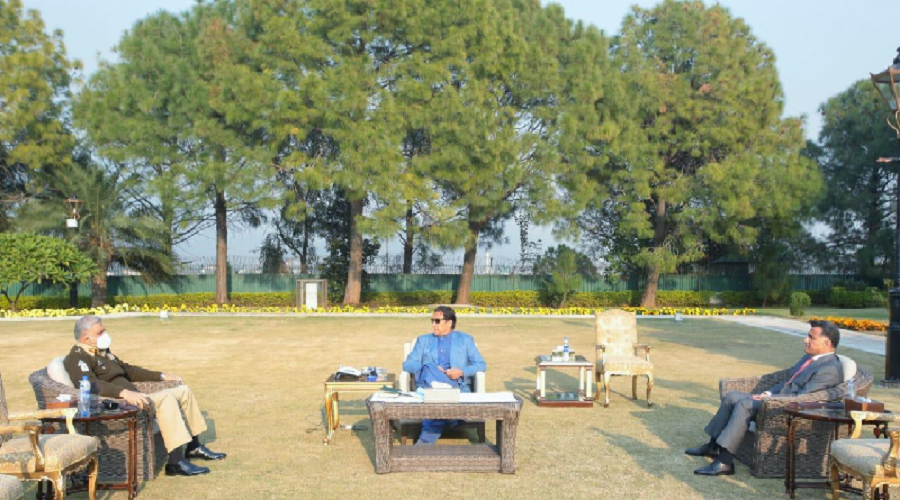 ISLAMABAD: Prime Minister Imran and his top national security aides on Thursday vowed to go all out for defending the country in case of aggression, Dawn newspaper reported.

The meeting took place in the backdrop of reports that India was planning a ‘surgical strike’ against Pakistan, the report said.

This has been twice stated by senior officials over the past fortnight, more lately by Foreign Minister Shah Mahmood Qureshi during his visit to the United Arab Emirates.

“It was resolved that the defence of the motherland will be ensured with the support of entire nation at all costs,” the Prime Minister Office said, according to the Dawn report.

The PMO said the meeting had discussed the “external and internal security situation” and “professional matter pertaining to the Army”.

Expression of concerns about the “human rights abuses in occupied Kashmir and mention of ceasefire violations and Indian actions along the Line of Control in the media statement about the meeting left little doubt that the Indian threat was the main agenda topic of the meeting”.

“Concern was expressed over continuous human rights violation in Indian Illegally Occupied Jammu & Kashmir,” the PMO said, according to the report.

“Ceasefire violations and frequent provocative measures from Indian forces along Line of Control came under discussion,” it further stated.

Pakistan believes that India could be planning to attack it for defusing internal pressure and divert the world’s attention from the aggravating situation in occupied Kashmir.

Mr Qureshi, during his UAE trip, had said that India was trying to get a nod from “important players” for surgical strikes inside Azad Kashmir and Pakistan. He had said that Pakistan would respond with full force if attacked by India, Dawn news reported.

Pakistani armed forces have been on ‘high alert’ for weeks to pre-empt any Indian misadventure, the report said.

“I am making absolutely clear to the int community that if India was to be reckless enough to conduct a false flag operation against Pakistan, it would confront a strong national Pakistani resolve & be given a befitting response at all levels of the threat. Make no mistake,” Prime Minister Khan had said last week.

“If she [India] dared to threaten our borders, it will turn into the final battle that history will remember. Temple bells will stop ringing, grass will cease to grow, and birds will stop chirping,” VoA quoted the minister as having said implicitly warning of a possible nuclear exchange with India in the event of a war. (Dawn)