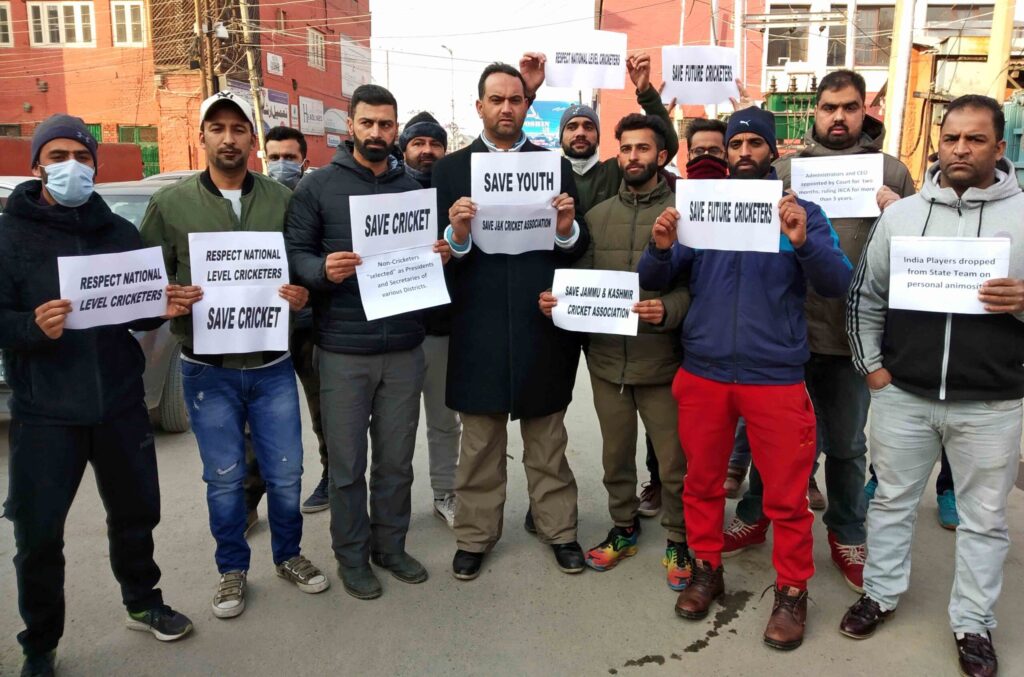 Srinagar, Dec 18: Alleging hijacking of the Jammu and Kashmir Cricket Association (JKCA), the top cricketers from Srinagar including an International player, Abid Nabi Friday staged a protest against the association for dropping the deserving players from the selection list for the upcoming T-20 Mushtaq Ali tournament.

Scores of players especially those who have played Ranji trophy assembled at Srinagar’s Press Enclave in the afternoon where they raised slogans against the JKCA for resorting to favoritism and leaving the deserving cricketers at bay.

Abid Nabi said that he is not getting a chance to play for the J & K team since Parvez Rasool has become the captain of the team. “Despite giving my best in the leagues and local matches, I am being punished for no reason by keeping me away from the field,” he said.

He added that it is not only Abid Nabi, but many of the deserving players like Amir, Khalida and others are being dropped from the list, which was recently out for the upcoming T-20 Mushtaq Ali tournament. “Although these players are best and have been giving best performances in every match, for no reasons, they are being dropped,” he said.

Majid Dar, a former Ranji player, accompanying him during the protest, said that it is unfortunate that a top cricketer like Abid Nabi is not being allowed to enter the stadium when he had gone there to seek details as on what grounds he and some other key players have been dropped from the list of players.

“We don’t want the association to be hijacked. We want good cricket to always rise and deserving players to play for the J&K,” he said.