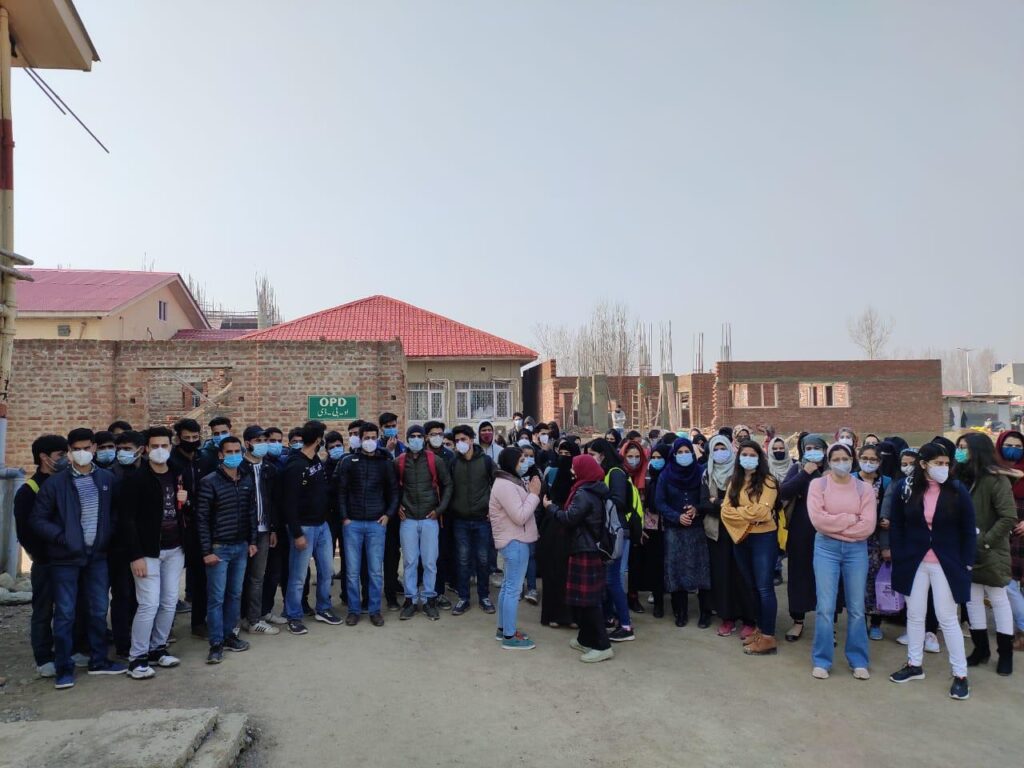 Srinagar, Dec 18: As many as 250 MBBS students on Friday morning staged a protest in the premises of SKIMS Medical College Srinagar against the administration for not taking concrete steps to commence the clinical classes and forcing students to face hardships.

The students from 10:00 am assembled within the premises of SKIMS Srinagar to register their protest and press for their demands.

The protesting MBBS students said that for the past over six months not a single clinical class was held nor the administration has vacated the designated covid staff from hostels.

They said that the protest was organized against the administration, who for the past six months has kept them away from the classrooms deliberately.

The Covid staff has been accommodated at the hostels for which students have already paid, they said, adding that no clinical posting has been done so far since the entire hospital has been designated as Covid hospital even after the classwork resumed a month back, thus leaving them to lurch at large.

“Even now, the Covid staff has occupied the hostel rooms despite the students having already paid the hefty amount as hostel fee.

“After repeated requests to shift them, nothing was done by the administration leaving the students to suffer and face immense problems”, they said.

The MBBS students said that due to the neglecting attitude of the administration especially the Principal SKIMS Medical College, eight students have so far tested positive for Covid-19 after they came in contact with the Covid staff within the hostel which is highly worrying and disturbing for the students.

“We are not being allowed to enter the hospital or college entirely for the clinical purpose, which has taken a hit at our academics while the classes are only held at wards,” they said.

They said that the recent annual examination was held in the hotels (Private accommodation). ” We were forced to live outside and appear in the examination.”

Besides this, they said the deliberate academic loss has cost them additional six months if compared with the medical colleges pan-India (National Medical Colleges) only because the hospital has been entirely designated as a Covid facility.

“The six months delay is a deliberate attempt since all the students were made to move back home and the hospital even now is serving as an exclusive Covid facility”, the protesting MBBS students said.

Nearly 500 MBBS students are suffering due to the negligent attitude and non seriousness of the administration towards the enrolled students despite knowing the challenges faced, the protesting students said—(KNO)