GOI is criminalizing dissent, branding those seeking protection of their honor as anti-nationals: Omar Abdullah

‘Shame on those who still fight for power amid ongoing tumultuous situation, If privileges for Nagas, Himachal people, why not Kashmiris’ 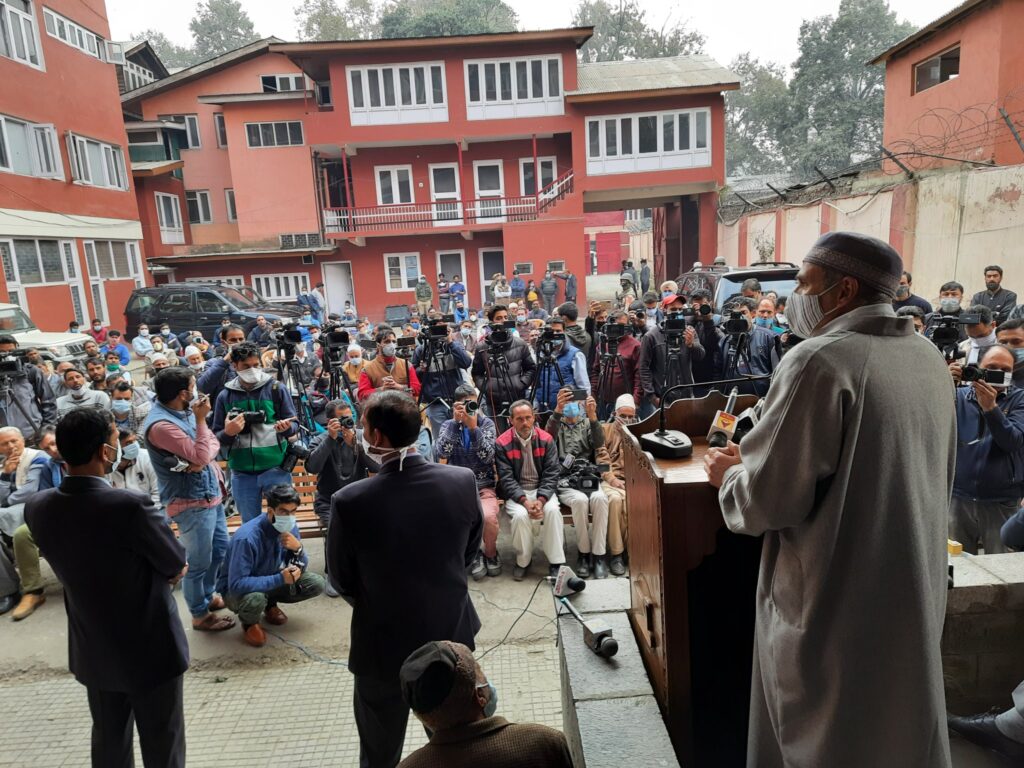 Srinagar, Oct 29: Former chief minister and National Conference (NC) vice president, Omar Abdullah Thursday lashed out at the Government of India (GOI) over “criminalizing dissent and branding those seeking protection of their honor and integrity as anti-nationals.”

He said the Centre was compelling the mainstream politicians of J&K to call it a day.

Addressing party workers in a function at Nawa-e-Subha here, Omar asked the central government to come clear what they are seeking from us.

“The government is coercing us through various tactics so that we could bid adieu to mainstream politics,” he said.

He said that the decisions taken by the government since August 05 last year have changed the ground situation.

“In the beginning of last year, we were eyeing on elections and now we have been fighting for our rights,” he said.

Omar also stated that the leaders have joined hands to fight in unions but it is unfortunate that those who raise their voices for their identity and other rights are being termed as anti-nationals.

“The government while abrogating the special status claimed that the decision was taken for the integration of Jammu and Kashmir with the union of India. However, the fresh decision on land law has put a question mark over the claims,” he added.

“Delhi left no stone unturned to weaken and divide the mainstream political parties in Jammu and Kashmir. We (mainstream parties) remain busy in opposing each other till last year. As our voices got weaker, the government succeeded in their plans and snatched our identity. We have joined our hands now. But, I wish this alliance among the mainstream parties would have been forged a couple for years back,” he added. “Had this alliance take place a few years back, the situation could have been different,” Omar said.

He said that the central government’s decision last year has forced mainstream parties to join hands. “Today, I am not counting seats as this fight is not for the power. (lanat hai hum par agar in haalat mein aaj bhi hum kursi ke liye lad rahe hai’ (Shame on those who fight for petty power amid ongoing tumultuous situation).” He said people will never forget the leaders if they keep eyeing on the secretariat and the power.

About the repealing of land law, Omar said that “nobody can buy land in Nagaland, Arunachal Pradesh, Himachal Pradesh and many other States of the country, but here in Jammu and Kashmir, the rich section has been given open land to throw people of J&K out. Amid this situation, they are expecting silence from us, which is not possible. We will fight and are not ready to lose it. I don’t know how long this fight will continue, but will fight it tooth and nail.”

“We are being tagged as anti-national for fighting for our rights. I must recall the role played by Maqbool Sherwani, who under this (NC) flag played a pivotal role in 1947,” he said.

He also said that whatever has been snatched from J&K people, was mentioned in the constitution, adding that it was the Maharaja Hari Singh, who granted special status to Jammu and Kashmir and the government has demolished the constitution and those who are fighting constitutional rights are being tagged as anti-nationals.

“In Nagaland, leaders have clearly rejected Indian constitution, flag and sovereignty, but despite this, talks are being held with them. But, when people in Jammu and Kashmir are raising voice for their identity, land and other rights, you are tagging them as anti-nationals,” he added.

About today’s protest by PDP against land law, he said the party leaders in Jammu were allowed to carry out a protest rally yesterday but in Kashmir the leaders from same party were detained.