Won’t Accept the Bargain of Statehood against our Special Status: PDP 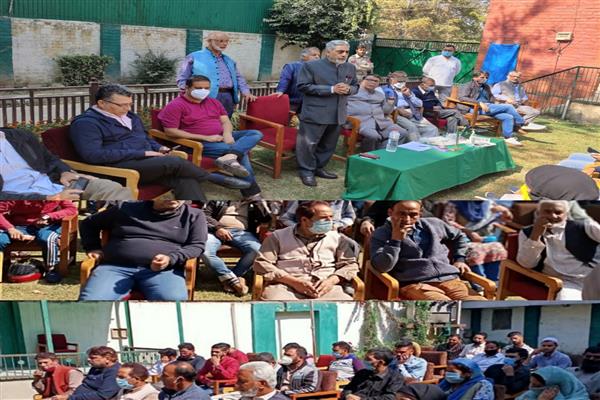 Srinagar, October 12: Peoples Democratic Party (PDP) has reiterated that mere restoration of statehood to J&K is not going to undo the plunder of rights of its people and that the party would always strive to restore the position of August 4, 2019 as the first step towards working out the resolution of the J&K issue in a dignified manner.

Addressing the party workers meeting of zone Khanyar-Srinagar at the party office, PDP General Secretary Ghulam Nabi Lone Hanjura said that the people of J&K can’t be tricked into the bargain of statehood against our special status, rights and identity.

“They want to force us into acceptance and create a sense of failure among us but let me make it clear, we will not relent in the pursuit and struggle for our agenda of resolution of Kashmir issue through dialogue and reconciliation of which the restoration of our special status has to be the cornerstone,” Hanjura said.

Talking about the continuous attempts by the present regime aimed at disempowering Kashmiris while creating a façade of development, Hanjura underlined how fakery like Back to Village is done for mere Public Relations and autocratic farmans like property tax proposals are being imposed.

The meeting was convened by the Party District President Srinagar and former Legislator Muhammad Khurshid Alam who enjoined upon the workers to emulate the uncompromising stance of the Party President Mehbooba Mufti when it comes to serving the cause and rights of fellow people.

“The conduct of our leader Mehbooba Ji has shown the way and made it amply clear that PDP has a crucial role to play in the struggle for our rights and identity. The fact that Mehbooba Ji continues to be in detention which by all means is illegal is an acknowledgement to this effect,’” he said.