Pre 2019 situation a far cry unless unconstitutional and unilateral decisions of August 5 not reversed: NC 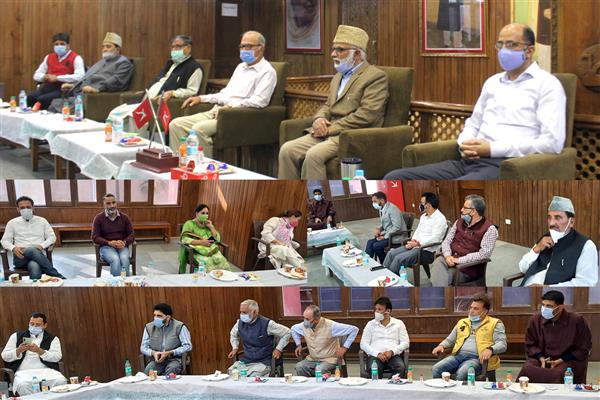 Srinagar, 07 Oct: National Conference (NC) on Wednesday said that pre-2019 situation is a far cry unless people are not empowered politically and the unconstitutional and unilateral decisions of August 5 are not reversed.

According to the statement, the participants expressed concern over the uncertainty, chaos and confusion that has beset J&K following the measures which were taken on 5th of August. The speakers concurred with the pain and suffering of the people of J&K in particular the valley of Kashmir who continue to live through economic catastrophe, unemployment, fear, saying the new normal in J&k has cost it its jobs, tourism, industries, handicraft, horticulture. The leaders maintained that people are seeing no light at the end of the tunnel and that the government was busy in photo-ops, and other media spectacles, not paying any attention to people’s problems especially inflation, power crises, poor governance, unemployment and widening political void in J&K.

The leaders hailed the efforts of party president Dr Farooq Abdullah in his efforts of restoring special status to J&K.

While addressing the meet, party General Secretary Haji Ali Muhammad Sagar said that every single sector of economy was bleeding and government on its part has failed to provide succor to the ailing businesses. He said the administration has been serving mere catch-words to people as recompense and that no substantial revival plan was envisaged by the incumbent regime to help the people tide over the economic crises induced by successive clamp-down and lock-down since August 5 2019. The situation of people associated with handicraft sector, horticulture, small and medium scale industries, he said was deteriorating with each passing in the absence of any effective fiscal support from the government.

“The journey to catch up with the pre 2019 situation is a far cry unless people are not empowered politically and the unconstitutional and unilateral decisions of August 5 are not reversed. There can be no trade-off between the political aspirations of the people and development and that no development can take place unless people are not politically empowered and the unilateral, unconstitutional decisions not reversed,” he said.

“The efforts underway by the party president towards forging unity amongst political parties for the restoration of J&K’s special status are laudable. Gupkar Declaration affords a non-violent and peaceful path towards securing the interests of the people of J&K. NC has all along been a votary of peace and non violence, we will continue to uphold that age old political proclivity of ours,” he said.