‘My mission is to end militancy & bring peace in J&K’: LG Manoj Sinah 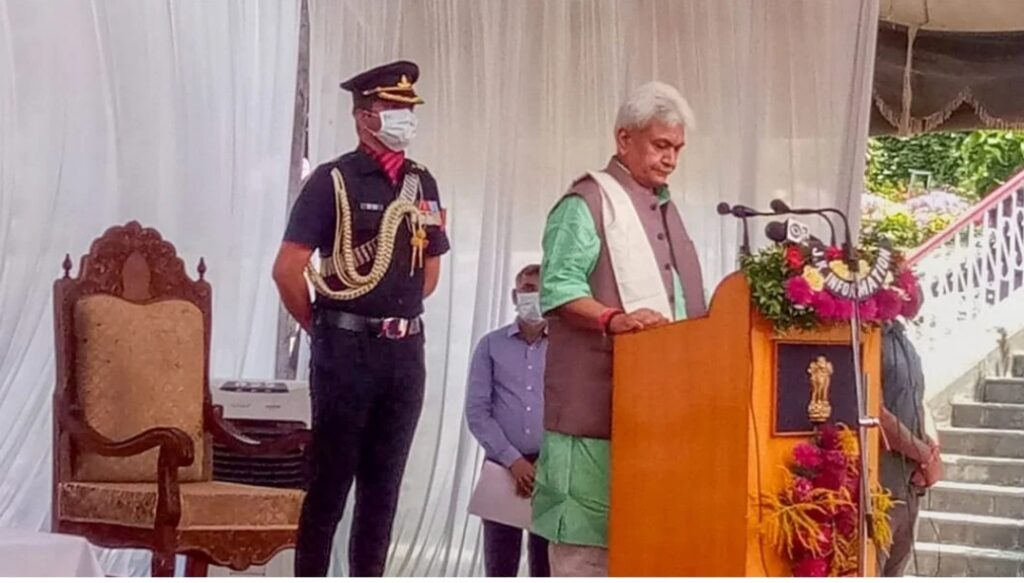 Srinagar, Aug 07: Lieutenant Governor of Jammu and Kashmir Union Territory Manoj Sinha Friday said that his mission in the UT will be to bring peace, end militancy and to ensure development by all means.

“J&K is India’s heaven and crown. I have been given a chance to play a role here. August 5 is a historic day and will be remembered in history. I met some officers and they told me that in the past one year, there has been a lot of development in all sectors. I will take forward the same process of development with a speed and vigor,” Sinha told reporters at Rajbhawan Srinagar, soon after taking oath as the new LG of J&K UT.

He replaced Girish Chandera Murmu, who has been appointed as Comptroller and Auditor General (CAG).  He said there is a need to instill confidence among the “aam Janata” of J&K in democracy.

“I have no specific agenda and there will be no disparity. There will be equal treatment to all. And we will work for the welfare of people of J&K. I will try on that front and I have spoken to some officers in that regard already. I will be in touch with the media too besides common people of J&K,” Sinha said.

The new LG said that his mission in the J&K UT will be to ensure peace, end militancy and to work for the development by all means. Asked he was public friendly and how he will maintain a balance on that front, Sinha said that the team of officers, who are part of the system will stay in touch with the people.

“We will listen to the grievances of people and ensure their timely redressal,” Singh claimed as per KNO

Earlier, the former Union Minister and senior BJP leader took oath as the new LG of the Union Territory of J&K at Rajbhawan here. Sinha has become the second Lt Governor of the UT that was carved out of the erstwhile state of Jammu and Kashmir last year.

He is also the first political leader to take charge of the UT. He has replaced GC Murmu, a 1985-batch IAS Officer from Gujarat cadre, who was yesterday appointed as the new Comptroller and Auditor General (CAG) of India.

Sinha, who arrived in Srinagar last evening, was sworn in as the new LG in a ceremony held at Rajbhavan in Srinagar.  A surprise pick for the post, Sinha’s appointment is being seen as an attempt to revive the political process as well as a complete overhaul of the security apparatus in J&K that is facing threats of terrorism as well as unemployment due to Covid-19 pandemic crisis. His appointment to the post also comes on the first anniversary of the Centre’s move to scrap special status of Jammu and Kashmir under Article 370 and bifurcation of the erstwhile state into two UTs- Ladakh and J&K.

Sinha (61) has been a Lok Sabha MP and a member of the BJP’s top leadership panel, the National Council. He was the Minister of State for Railways and Telecom in the first term of the Modi Government. Meanwhile, sources said that Sinha will chair a series of meetings with the administrative secretaries and officers of various departments besides advisors to get feedback on the work done so far. KNO