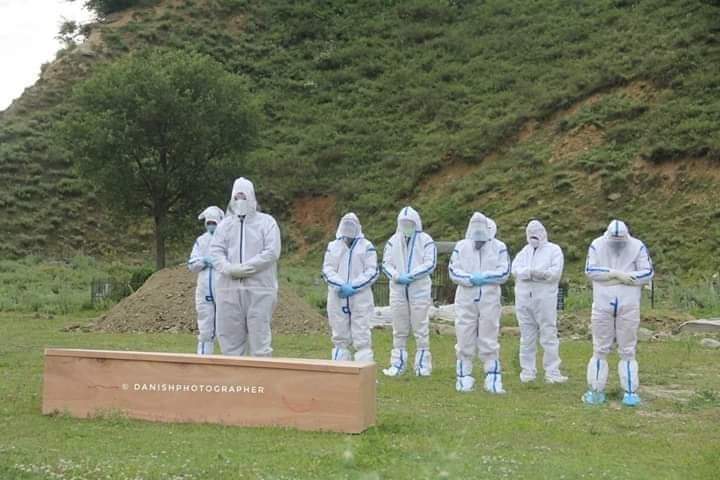 Srinagar, June 14: Jammu and Kashmir reported three deaths due to covid-19 on Sunday, taking the overall count of people succumbing to the virus in J&K to 60.

Professor Farooq Jan, Medical Superintendent SKIMS said that a 76-year-old man from Old Srinagar’s Zaina Kadal area died at the hospital this evening. The septuagenarian, with history of travel to Saudi Arabia, was a case of “hypertension, T2DM, Chronic Kidney Disease,” he said.

The man’s sample had been taken at Srinagar airport on May 29 and had later tested positive. He was shifted to JLNM hospital from airport and on June 6 he was referred to SKIMS Soura for being a CKD patient, Professor Jan said.

“He was admitted in infectious disease ward on same day. The patient had severe ARDS,” he said, adding “He was intubated and the cause of death was cardio-respiratory arrest.”.

Earlier, an 85-year-old from Kupwara district died at CD hospital, one of the exclusive facilities for the management of the covid-19 patients in the Valley.

Official sources said that the octogenarian was on Saturday shifted from SMHS hospital to CD hospital.

“He was 85-year-old, a known case of chronic kidney disease. He was shifted from SMHS hospital yesterday. He was already positive for the covid-19,” Dr Salim Tak, medical superintendent CD hospital said.

Meanwhile, a 69-year-old man from Gandhi Nagar died at Government Medical College Jammu, sixteen days after he had tested positive for novel coronavirus.

Dr. Nasib Chand Digra, Principal GMC Jammu, said that the elderly man had comorbidities like hypertension, Chronic Obstructive Pulmonary Disease (COPD) and Ashthma. “He had severe sepsis and died around midnight (1:30 a.m.),” he added. A known businessman, the elderly was admitted to the hospital on May 29.

With the fatalities, 60 people have succumbed to the virus in J&K—Seven from Jammu and 53 from Valley. So far Srinagar district with 15 deaths has the highest fatalities followed by Baramulla 11, Kulgam eight, Anantnag six, five in Shopian, four each in Jammu and Kupwara, two each in Pulwama and Budgam while one death each has been reported from Bandipora, Doda, Udhampur and Rajouri. (GNS)