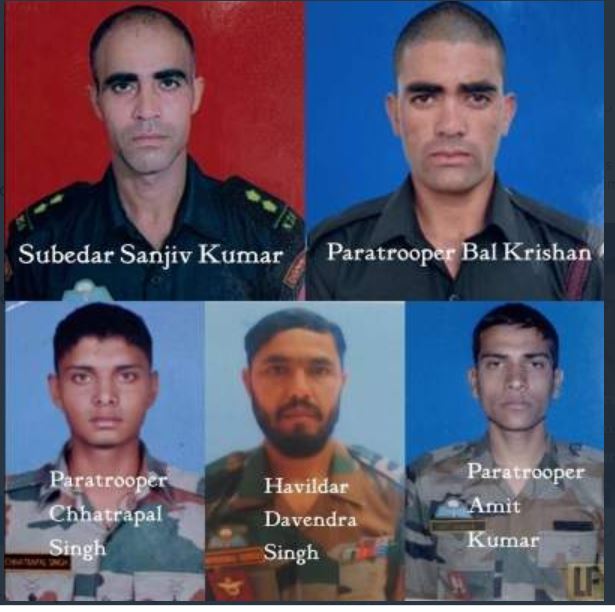 Srinagar:  For the first time since the abrogation of Article 370, the Army suffered the biggest casualty in a single day while foiling an infiltration bid at a high-altitude pass on the Line of Control (LoC), Chandigarh based The Tribune Newspaper reported.

The newspaper reported that Five members of the elite para unit and five militants were killed in the fierce gunfight that began on Saturday evening in the snowbound Ringdori forest area of Keran, 120 km from Srinagar.

“All five slain soldiers belonged to 4 Para – the unit which undertook the 2016 cross LoC surgical strikes in the Pakistan Occupied Kashmir,” Tribune reported

The five soldiers killed in the gunfight have been identified as Subedar Sanjeev Kumar, Paratrooper Bal Krishan from Himachal Pradesh, Havildar Davendra Singh and Paratrooper Amit Kumar from Uttarakhand and Paratrooper Chhatrapal Singh from Rajasthan.

“All five slain soldiers belonged to 4 Para — the unit which undertook the 2016 cross-LoC surgical strikes in the Pakistan-occupied Kashmir”.

Sources said the operation to flush out the group of militants was carried out for many days in the tough terrain and bad weather.

After the first contact with the militants was established on April 1, the Army inducted two squads of elite Special Forces of 4 Para to trace the infiltrators.

Tribune quoting sources said during the combing operation on Saturday, a squad of the Special Forces, led by subedar Sanjeev Kumar, found some footprints of the militants and while following the trail in the snowbound area, they slipped into the deep Dawar nullah after snow caved in suddenly.

“There was a surprise in store for everyone. The militants were hiding there in the nullah and immediately a fierce gunfight broke out at a short range between the two sides. In the ensuing gunfight, while the entire group of the terrorists was eliminated, the Army lost three men on the spot and two were critically wounded, who later died in military hospital,” sources privy to the operation details revealed to the newspaper.